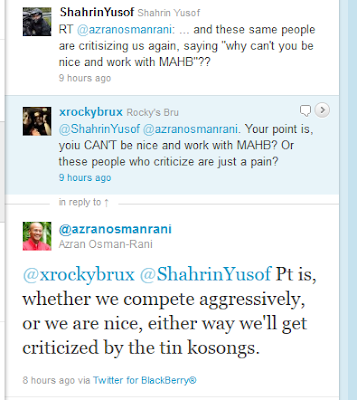 Kucing kurap and Tin kosongs. I can understand Azran Osman Rani is not amused by the way some people have been criticizing Air Asia or Air Asia X but calling those who criticize AA names is not on, I did tell him in response to his tweet this morning. A lot of us rooted for Air Asia when it was a victim of the industry bullies; today, some of us still are, even though AA and Osman's boss Tony Fernandes are perceived as the big bully. Many of us mean(t) well and "tin kosong" is an unkind thing to call us. Maybe the noise soounds to Azran like the noice empty cans make but some of us just want to see all the players - Air Asia, MAS and Malaysia Airports - work together in the nation's interest. Some of us don't give two hoots about your brashness or how big your ego is.
Sure, a lot of people have called Tony Fernandes names and recentlyeven the YBs, from Wee Choo Keong to Anwar Ibrahim and Bung Mokhtar to Tan Seng Ghiaw, have been talking, sometimes bitching, about the man and his airline in Parliament. Like Tony said in an interview with the Borneo Post recently, he has even been called "kucing kurap"  (actually, a YB used that on Air Asia, NOT Tony Fernades, see screenshot below).

But how many of his critics called him that? And if Azran thinks the whole world is against Tony and Air Asia (and Azran himself, of course), dig up the good things people have said about Tony and the praises they have heaped on Air Asia. Dr Mahathir said some flattering stuff about Air Asia recently. Even the King has conferred Tony a Tan Sri-ship at such a young age.
I am sure that without the critics, Tony would not be quite where he is today.
at December 05, 2011