Wisma's letter to The West Australian 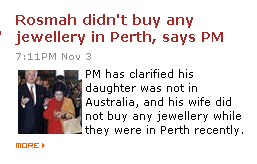 Ah, Malaysiakini has published the clarifications. (Gotta give it to these guys. They can be pro. Steven, after all, is a bona fide journalist ...)

So, Rosmah didn't buy no pearls.
And Najib's daughter was not in Perth at all!

Original article
was told the consul general in perth sent a letter yesterday evening to the editor of the west ausralian, the newspaper that wrongly reported about najib's daughter's spending spree here.