I've taken the following excerpts from Malaysiakini. Lim Guan Eng, I'm sure, won's sue Malaysiakini, so he can't sue me without suing Malaysiakini. The Penang Chief Minister is challenging Umno to publish the "VVIP molester son" story in "Umno's papers" and the same time threatening to sue Umno if it does that. Why doesn't Guan Eng just flatly deny it, just like he denied speaking ill of Johor recently? Why the drama and the threats? After all, the blog that "broke" the story didn't even name anyone. Doesn't Guan Eng realize that his antics are making people wonder? - Bru

Courtesy of Malaysiakini, which is not the official mouthpiece of DAP:

Penang Chief Minister Lim Guan Eng has declined to answer allegations in pro-Umno blogs that a VVIP's son was involved in a case of outraging the modesty of his female schoolmate.

Lim, who is DAP national secretary-general, has challenged Umno instead to publish the allegations in “their newspapers”.

“Let Umno publish the news first, then you will see what I will do,” said Lim during a press conference in Penang today.

“What happens now is they make allegations, then I reply (baling batu, sembunyi tangan). Why should I reply to them every time?” he asked.

Lim said he has better things to do then to reply to each and every allegation or speculation against him.

The Penang media fraternity was abuzz today with news of a VVIP's son who has allegedly been caught for alleged sexual harassment of a female schoolmate.

The unsubstantiated allegations are going viral among pro-Umno bloggers, and that the identity of the VVIP has been speculated to be that of Lim.

It was claimed that his 16-year-old son had been recently transferred from a Chinese school, Heng Ee, to the well-known St Xavier's Institution recently due to alleged disciplinary problems.

However, the school has denied the allegation, saying there was no truth in the rumours.

The issue was first higlighted in a pro-Umno blog where the blogger Dr MiM - who blogs at novandri.blogspot - said that many had already speculated about the identity of the boy.

He added that pro-opposition bloggers are “biting their fingers” because the VVIP is not from BN but from “their own species”.

“If you are wondering who is this VVIP from Penang - he knows calculation and mathematics that he is able to calculate (set a price) at RM100,000 for each breast groped by his son?” quipped the blogger.

'Transfer carried out according to procedure'

Meanwhile, a source from Heng Ee school said Lim's son had indeed been transferred to another school but that the process was carried out according to proper procedure.

He denied allegations that the boy was moved to St Xavier's Institution due to disciplinary problems, as alleged.

The source said he was quite surprised to hear about the allegations in the blog.

The blog has published a photo of the girl, but the source denied that it was the individual allegedly involved.

More reading: VVIP's son involved in molest case?
p.s. Guan Eng hasn't been having a good week. Recently, in Segamat, they told him to "berambus" ... 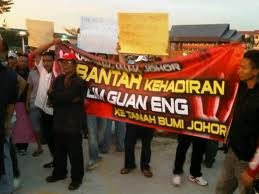