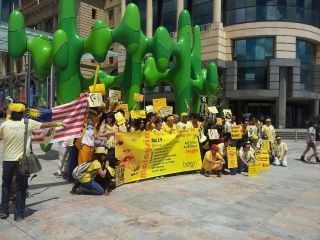 PERTH, Sat: With over 50 heads of governments attending the once-in-two-years meeting, the hosts can't be too careful. Security is super tight. Some local NGOs have threatened to stage protests in conjunction with the meeting but you could not see any of these activities. The "Occupy Perth" movement involving 300 people seemed more subdued than expected. Najib & Co definitely missed lecturer Wong Chin Huat's five minutes of fame as he addressed fellow protesters from all around Australia and the Commonwealth in a city square yesterday, at the same time CHOGM opened its three-day meeting, and told them about Bersih and what it stood for. With him on stage were about 30 Malaysians and friends in yellow tees, some of them students and some permanent residents, who chanted "Bersih, Bersih" at Chin Huat's trained cues. There was a dog, leashed and draped in yellow, Malaysia's royal colour. I swear it was barking the same chants, too!

Some pictures I took [I have one of the doggy on my camera, will post later]. I went over to Chin Huat, who flew in two days ago, who said the protesters will be there tomorrow at Burswood Park, where the PM is meeting Malaysians in Perth before flying off to Malaysia and then to Mekah, to be heard and seen.

p.s. I mentioned to a protester the obvious, that none of them were Malays! It's the same in London when the PM was there some months back but at least the Bersih protests in then had one or two Melayus. Perth is said to be home or second home to thousands of Malaysians, and one of the most favourite destinations for Melayu Malaysia to migrate. 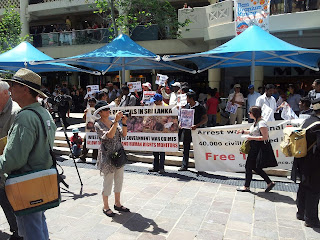 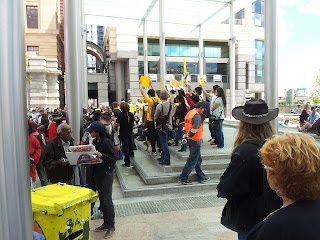