Bajet 2011: Najib to continue where Mahathir left off 8 years ago. Two days to go before Najib unveils the goodies in his Bajet 2012, talk is rife among the pundits of this being a "peope-friendly" budget, for which all of them could be proven right. But what has escaped most pundits are the voices rising from the desa and reaching the big city (see my earlier posting Bajet Desa).
These are the Felda settlers, especially the second generation, who have been calling out for more job creation, more business opportunities and the need to move along after 50 years of success. They seem to be looking for a game changer, a real transformation, as opposed to small incremental improvements. 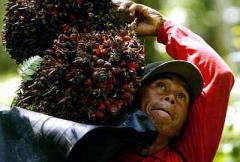 Felda's success mirrors that of Malaysia's own relentless march in generating ever higher GDP figures over the past 50 years.
Of late, those Felda voices are being crystalized in asking for the stalled listing of Felda to be revived (What Settlers Want, 15/8/11). This was first announced by Dr Mahathir in his budget speech in 2003 - his last - but when he stepped down as PM, the idea went nowhere. For 8 years, it seemed forgotten.
No doubt, Najib as the first PM to fully embrace Felda as if it were his own "constituency", is keeping his ears to the ground and may be tossing the idea of responding to the ever louder calls by Felda settlers to have Felda listed.
One thing is sure to remain since the original announcement my by Dr M 8 years ago - settlers' land will not be touched in such an exercise. Much of the renewed enthusiasm to list comes from the recent success of Felda's listing of its sugar subsidiary, MSM Malaysia Holdings Bhd, where settlers got a windfall of RM300 million through shares in Koperasi Permodalan Felda, which is owned fully by settlers. In fact, KPF is said to pay out some of the hihgest dividends, at 15 per cent per annum, which is a testament to settlers ability to run big business.
So this may be the Bajet where Najib transforms Felda into a listed behemoth to rival the likes of Sime Darby, no doubt a move that will make the market happy and the settlers happy.
at October 05, 2011