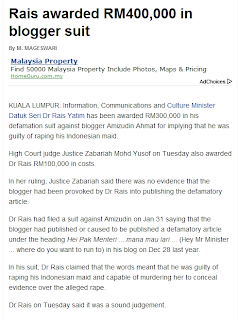 ... but not public opinion online. Just pop in to lowyat.net, which is probably the country's largest online forum, and just listen to what Netizens are talking about with regards to Information Minister Rais Yatim's win against a previously unknown blogger, Din Sharpshooter, over a posting early this year on the Minister's alleged rape of an Indonesian maid.

First, someone in lowyat put up this story about 10am:

And then the reactions poured in .. 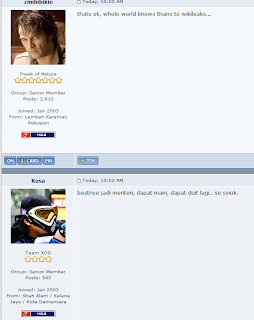 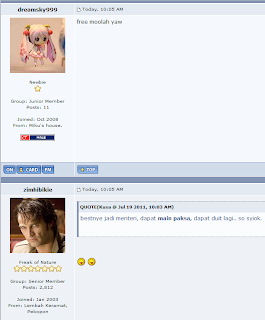 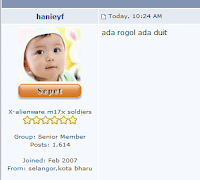 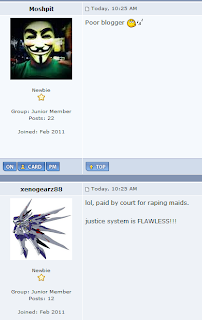 I have not read a single comment congratulating the Minister. In fact, all these new postings can be libelous, come to think of it. Is Rais going to go after each and every one of them? Will the court keep on awarding RM300k to the Minister for every case he wins, now that it's been established that his reputation costs that much?
Din Sharpshooter is not likely going to be able to pay up. So it is likely that he will have to allow them to declare him a bankrupt. Poor blogger, indeed. But once bankrupt, they say, you have nothing more to lose. We have seen a couple of individuals who, after their descend into financial bankruptcy, rise to a different kind of, er, stardom. They become less afraid of the consequences. Din Sharpshooter may become another 'star' or he may just disappear, hands in his head, shamed. If that is the case, serve him right, some may say. And if the other scenario turns out to be the case, serve Rais right.
The Minister has another case pending in court, against a Sabahkini editor, over the same maid rape allegation.
at July 19, 2011