The Perfect Rally (How to hold a peaceful Malaysian protest, London style)

"Kuning, Kuning ... Najib Pening". Look at these pictures I took last Friday in London. Twenty eight individuals took part in the rally.It was peaceful, tak menyusahkan orang, did not obstruct traffic at all, and was rather entertaining at times. Their mantras: "Kuning, Kuning ... Najib Pening". "Zalim, Zalim ... Hisham Zalim". If this is the kind of rally we can have in Malaysia, I think a lot of people will be fine with it.
So how to hold such a peaceful rally?
Easy.
In the case of  this rally:
1. The police allowed the protesters to hold a demonstration
2. The protesters agreed to confine themselves to the road divider and only to the road divider (which is about 30 feet long, I guess)
3. No protester must cross the line (except when snapping pictures of themselves)
4. A couple of uniformed cops were present to ensure that the protesters did not cross the line
5. The protesters had to observe a time limit
Ben Singh (the handsome bai in the second pic) and friends were very disciplined. They did not break any of the rules, did not provoke the Bobby present, and did not taunt the other Malaysians residing in London who came to the hotel to have dinner with the PM, wife and their delegation from Malaysia. Najib and wife were said to have waved at the protesters and, later in his dinner address to Malaysians, even mentioned "the Malaysians outside there".
I tweeted during the dinner that 97 per cent of the protesters were non-Malays. Some people on Twitter were offended and accused me of being a racist. But I was merely stating a fact. A glaring fact.
I asked a Melayu who has been residing in London for decades why the Bersih protest drew the non-Malays and hardly any Malay. His answer was frank.
"When we Malays merantau abroad, especially after we have lived and worked abroad for years, we tend to be grateful to the Government back home for taking care of us in Malaysia. Kita jadi sedar."
So why are there more non-Malay Malaysians taking part in the protests in London? "They feel more liberated out here, I suppose," he said. "Or why don't you ask them?"
I did speak to some of the protesters earlier. More on that later, perhaps.For now, enjoy these pictures ... 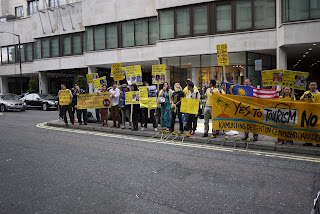 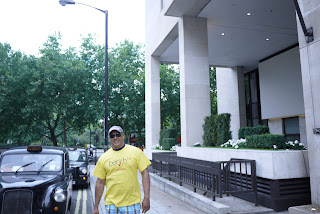 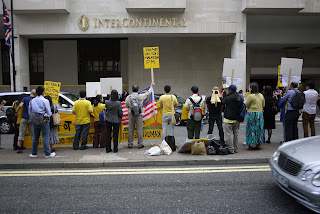