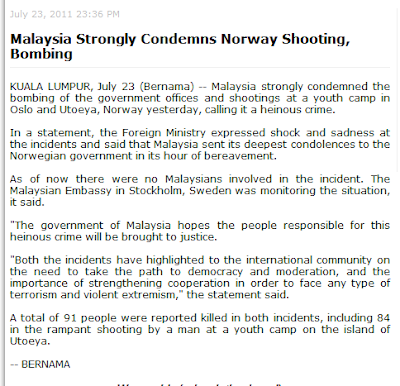 When it comes to acts of terror, you don't jump to conclusions. The people behind each act could be your timid neighbor or classmate, and it could be your right-wing, church-going blue eyes, or an Aryan who hates other Whites, or your favorite bearded and turban-ed Moslem.

Great thing our Foreign Ministry DID NOT jump to conclusions in its immediate response and condolence message. (And contrary to seasoned journo Bujai's assumption or assertion, our Foreign Minister did not fail to react to the Oslo killings; he had despatched an immediate condolence note to the government and people of Norway).

For a good old-fashioned journo analysis, read Azmi Anshar's THE BLIND SPOT IN TERRORISM
at July 25, 2011