No to Bashir, but some of us welcomed Blair ...


"If ICC is really for justice why don't they investigate the very well documented war crimes and crimes against humanity committed in Iraq, Afghanistan and Palestine...we believe most African countries share our opinion on this."

"Do you think a man who has been issued a warrant of arrest will come to Malaysia?" - Anifah Aman, Foreign Minister of Malaysia. [Anifah in favor of continued engagement with Sudan by Bernama] 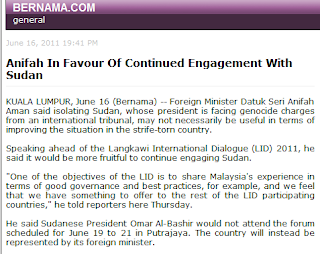 Someone had to set the record straight. Quite a few Malaysians had jumped the gun after a wire agency reported that Omar al-Bashir, the Sudanese President on an international tribunal's "Wanted" list, would be coming to Malaysia for the Langkawi International Dialogue. I know some of them, too, and feel very embarrassed for them.
But a war criminal did come to Malaysia not too long ago. He is Tony Blair, the former UK Prime Minister, who together with George Bush Jr told the Americans, the Britons and the rest of the world about the existence of weapons of mass destruction (WMD) in Iraq and used this as an excuse to attack the country, murdered thousands of Iraqis, and hang their President. As it turned out, there was no WMD in Iraq to start with.
Read Who's Bringing in the war criminal into our home? I don't remember these few Malaysians protesting Blair's visit to Sunway.
at June 16, 2011