The Kiasus have just insulted you!


Original posting
So, what are you going to do about it, yb Zahid?
Click here for the link. 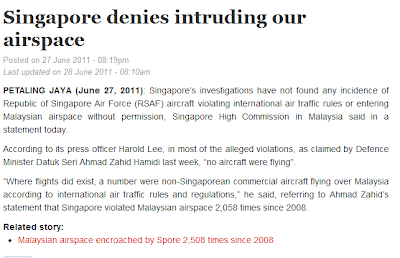 Our Defence Minister said in Parliament to a question by YB KJ that our airspace had been repeatedly violated by the Singaporeans. 2508 times since 2008! But now they are saying that YB Zahid Hamidi talked cock. They are not just flatly denying it. The way I read it is they are implying that we don't know how to read the radar.


"Where fligths did not exist ... non-Singaporean commercial aircraft flying over Malaysia ACCORDING to international air traffic, rules and regulations ..".