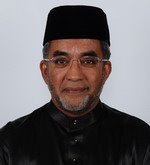 SEQUEL 1. Lim Guan Eng government's plans to hold elections for Penang's Islamic officials did not happen. The Agong,  whose consent the state government should have sought on behalf of the island's Chief Minister, has said NO GO. The formerly gung-ho Abdul Malik Abul Kassim (pic), state government's Exco in-charge of religious matters, is quiet like a mouse.

SatD the blogger is having a field day for once again he is spot on (Penang and DAP should try and get him as their advisor). My posting Fire Them, O Paramount Ruler! was based largely on his mini thesis that Penang's action would undermine the Agong's position. In The Republic of Penang vs Agong: The Return Server, SatD demands a witch-hunt.
SEQUEL 2. The blog posting Pas spooks Umno on Islamic state is most baffling. As we all know, the Islamic party recently dropped its faithful pursuit of an Islamic state. A matter of priorities, the leaders declared. To the layman, Pas has been forced to abandon its dream of turning Malaysia into The Islamic State of Malaysia. The DAP, its ally in Pakatan Rakyat, is dead against an Islamic state. Over the dead bodies of some of its leaders.
Anyone can see that that Pas has spooked itself on the issue of Islamic state. A DAP leader has told Pas, over his dead body. Everybody else, including (or especially Umno) has been trying to talk Pas out of it and now, finally, Pas is listening.
Read PAS tidak lagi perguangkan negara Islam? Bahaya "ulapol" (ulama agama berpolitik) dalam masyaraka. Bahagian 1 by Jahamy