For the sake of the taxi drivers, please Ambiga call off the yellow walk!

LATEST: Poll manipulated, says the Star.
Kit Siang and Malaysiakini are going to town with the results of a poll on Bersih conducted by the Star, which is a pro-Government paper. The results purportedly found that more than 99 per cent of the respondents said YES, the Bersih walk should be allowed! (See my posting at the bottom of this page). The Government has said the Bersih walk on July 9 will be an unlawful event as no permit will be issued.

The Star says it suspects the poll has been manipulated. Pro-Bersih main kotor, an editor sms-ed me a while ago. 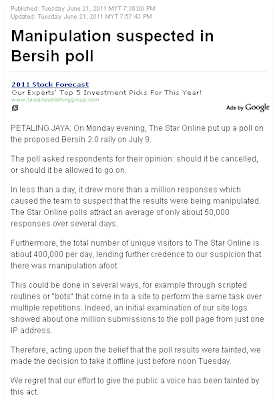 
Petekma: Bersih rally a nuisance. Trust Bernama to interview taxi drivers, H E R E. Err, actually, the national news agency spoke to just ONE taxi driver but the article said it conducted a survey among cabbies and found that they are generally against the July 9 rally. Bernama did talk to the deputy president association of taxi/limousine drivers and operators' association or Petekma, which represents some 25,000 taxi drivers/operators in the Klang Valley, although the article failed to mention it.
Proposed solution for Ambiga: Order the 100,000 protesters to go to the Bersih walk by cab!

There's another suggestion in an email chat group I'm involved in that Ambiga, Ibrahim Ali and Khairy tell their protesters to bring along a broom each and help sweep the city's roads and sidewalks clean while they do their walk..

The Star, meanwhile, is said to have brought down an online poll it was conducting after purportedly more than 99 per cent respondents said YES to whether the Bersih walk should be allowed to take place! Malaysiakini has a screenshot of it and Kit Siang is going to town with it.