Minding your language in cyberspace 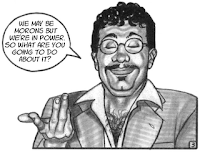 Kurang ajar comments. Thanks, Mahaguru, for the image. The Muslim Bloggers Association prez used the cartoon to make his point in Malaysiakini siar komen celupar hina Islam ... He is peeved at the Government for not taking action against hate-mongers and racist instigators who write hurtful stuff about Islam. He has a point. I won't ask (also, I don't expect) Hishammuddin to issue yet another warning here. I'd rather go with Apanama's suggestion that the news portal openly apologize for those comments and promise to be more vigilant. We can't allow such commenters take away the wonder of our media freedom. Read his Seditious comments a la Malaysiakini.
p.s. Syed Akbar Ali was charged for sedition for writing less sterner stuff about Islam than the following comments published by the portal. Remember Hasan Skodeng? He was charged with a criminal offence for writing a satire against Tenaga!