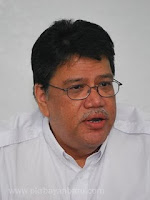 FREEDOM OF THE BLOGS. YB Zahrain , the former PKR man who quit with several others to form Konsensus Bebas, has questioned the manner in which The Star, which is a mainstream media, has been reporting on the Royal Commission of Inquiry into Teoh Beng Hock. The Member of Parliament said he felt the newspaper, which is owned and run by Chinese Malaysians, has been less than neutral and is leaning towards Teoh Beng Hock. Zahrain wonders if the Star's reporting is motivated by the same-ethnic factor. The MP draws our attention to the fact that The Star's editorial chief, Wong Chun Wai, is a member of a panel on the Malaysian Anti-Corruption Commission, which has been accused by some DAP politicians of murdering TBH.

One thing for sure, MP Zahrain enjoys freedom of the blog. Read his posting Duri Dalam Daging di SPRM?
p.s. I'm hoping that Wong will use this opportunity to revive his blog (last posting Feb 13, 2011) with a retort
at May 03, 2011

"Zahrain wonders if the Star's reporting is motivated by the same-ethnic factor."

Duhhhh! Hellll-looo??? Which Chinese prostitute has he been lying under all this while? Hahahaaa!

Malaysia was ranked 143 out of 196 countries surveyed worldwide in the latest media freedom study, which shows it is not free.

Together with Angola and Madagascar, it earned a score of 64 out of 100, which is considered not free.

Looks like someone messed up your link to YB Zahrain's posting,

Idiot! That is what he is!

Should we not be on the side of the deceased? He is accused of having committed suicide. Am sure if that is not how he died, it is for the living to ensure his death is recorded correctly? Even if it means the closure of MACC!! Of course MACC need not close. But the day we subordinate a life to an institution and someone's career, is the day we become less than human.

hah , laughable man! (to quote jesus in the BIG LEBOWSKI)...YOU DON'T FOOL JESUS....(big lebowski again)...and btw, jesus character in the big lebowski is a pedophile...and the director of this great movies is the great COEN brothers...

Imbecile! Can't think of a better
word for him.Cheh!

Zahrain's been demoted from angel to demon by the same idiots. If he re-joins the Pakatan Rectum, he will be hailed a hero once again.

The freedom seekers are themselves the curtailers of the very freedom they claim to champion. Simply a victim of indecision.

How about the lack of reporting of the Anak Sultan DERHAKA Bapak in Kelantan?? That was a STAB on the Sultanate in Malaysia like in Perak. If this is the malay tradition that believes in the Sultan Myth as defender of Islam....then Islam and Malay have a lot to answer to Allah....and we Malaysian would like to downgrade the Sultan to ceremonial status like Cromwell did to England. No harm highlighting the SHAM of this malay "so called tolerance" culture. No harm in being disobedient to illegal acts, unIslamic Acts, Racism, ISA....

Never knew these fcuking kataks still got credibility!
Lagi want to be bloggers too! Sheesh....the devil needs take a breather from this shitheads!

bumi-nonmalay,
Cromwell did not downgrade the king's status la. He simply chop off his head. U want to chop off our sultans' head?

this fat bugger got nothing much to do...

just trying to keep himself relevant...

Zahrain should ask why is the Star the top selling newspaper in Malaysia. Is it because other newspaper are run by idiots?

Zahrain and all those that left Pakatan and now attacked Pakatan vehemently without shame do not realise that the rakyat have not only lose respect towards you but just do not believe in you any more......so the best option is just shut-up and hopefully the voters put you back as YB. On the same token those who left BN for the opposition and attacked BN have also lost their credibilty as leaders. However, knowing the voters today both young and old are much more knowledgeable and smarter than the candidates the PRU13 will see young and intelligent candidates be appointed as YBs......the rakyat had enough of stupid issues being discussed by the YBs in Parliment and State Assemblies at the expense of development!

they say wongchunwei runs to rosmah mansor everytime he gets his ass in trouble. keep out out this rosmah