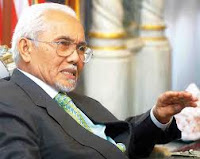 DISCREDITING TAIB. A group calling itself Friends of Pakatan Rakyat will be hitting the Bolsover Street in London on 28 February (Monday) at 9 am in the hope of starting a revolution against Taib Mahmud, the chief minister of  Sarawak.

I received this e-mail today:-

On 26th March 2011, it will be 30 years since the Sarawak Chief Minister, Taib Mahmud, one of the most corrupt politicians of South-East Asia came to power. On the 28th February concerned Malaysians and friends would like to highlight Taib's personal responsibility for the chopping down of most of Sarawak's rainforests at the expense of the indigenous communities. We would also like to protest against the international community's inaction with regard to Taib's blatant corruption and his placement of assets worth millions of dollars in Western countries.

With the impending election, we aim to:
- discredit the Taib reign internationally as a corrupt kleptocracy that has earned its riches through logging and corruption.
- Pressure the authorities in Malaysia (Malaysian Anti-Corruption Commission MACC) and western countries (Canada,USA, UK and Australia) to start investigations against the Taib family.
- In England - assets of Ridgeford Properties Ltd, belonging to the Taib family, should be frozen. The serious fraud office (SFO) should determine if the Taib family financed the real estate swindler Archilleas Kallakis.

The agenda is very straight-forward: help PR unseat BN in Sarawak. And the way to do it is to get very personal and by telling the people of Sarawak that they can stop being cowards and start being as brave as the people of Egypt. It is no secret that the Oppostion will be using Taib Mahmud's long tenure as CM of the state as a weapon to anger Sarawak's people. Selangor Menteri Besar Khalid Ibrahim, although embattled in his own state and party, set the ball rolling by telling Sarawakians to bring down their Chief Minister, read HERE.
Taib has to call for a state election by July this year.

ps Nik Aziz in Kelantan is the second longest-serving chief minister in Malaysia. He must be watching reformasi Bolsover with great interest.