Postcard from you to Najib

POS KAD HARI MALAYSIA UNTUK PM. The Malaysia Centre for Public Opinion is organizing a month-long campaign to encourage Malaysians to send postcards to their Prime Minister. It's your postcard, so you may write anything, but what Macpo is really hoping to get is you wish list of things you want the PM to do to improve your lot and place the nation in better stead. 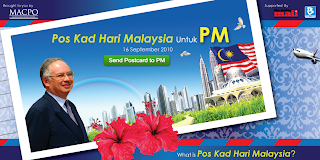 You have until 15/10/2010 to send your post card. The Malay Mail, that paper that cares, will publish selected postcards. To send your postcard NOW, click H E R E.

Selamat Hari Malaysia!*
* Could not blog earlier. The whole day was spent looking for a charger for my Ferrari. Finally found it at Low Yatt, which was just buzzing with people looking for the latest computers, mobile phones, PC games, or laptop chargers.

MAHAL oooo opinion RAKYAT, Najib should pay for our thoughts!!

Aperitif
Dear Sir,in light of recent debate on the NEP and its eventual planned demise, here is some frisson and croissant for all anti-NEPpian Warriors and Pro-equality Gladiators to chew upon courtesy of yet another study (not the earlier one i cited below) from the great "liberty, equalite, egalitaire" meritrocracy paradise Mother Earth is infinitiseminally grateful to be blessed with, called Singapore (the island without a lion):

Piece de Resistance
1. "Table 5 shows the results from GLSE technique of pooled time-series regression analysis of the three base-income models. The findings show that Malays and Indians have greater returns from education than Chinese do. But when holding education at constant,
Chinese have higher returns (S$8,239) for being members of the majority group. Malay
workers receive S$5,958, and Indian workers receive S$3,247 for being members of minority groups. This reflects discriminatory factors that work against Malay and Indian
workers. Given these estimates, we can now compare income differentials among ethnic
groups by decomposing the base-income equations for Malays and Indians.

2. Table 5 also shows that Chinese on average have more schooling than Malays and Indians. Chinese, with 8.19 years of schooling, earned an average income of S$10,540. With 7.85 years of schooling, Malay workers earned an average income of S$8,289, while
Indian workers with 7.45 years of education earned an average income of S$7,329. Based on the Chinese wage structure, Malay hypothetical income would be S$10,445, while
Indian hypothetical income would be S$10,332. Therefore, the difference of S$2,156 (S$10,445–S$8,289) between Chinese and Malay workers was due to discrimination, while discrimination would account for the S$3,003 difference (S$10,332–S$7,329) between
Chinese and Indian workers. According to the models, income differences due to educational
differences between Chinese and Malay workers, and between Chinese and Indian workers were S$95 (S$10,540–S$10,445) and S$208 (S$10,540–S$10,332) respectively. It
is clear from the above analyses that only a very small portion of the income differences between Chinese and the other two ethnic groups can be explained by educational differences.

What a way to measure popularity. The number of post card with positve and negative message will provide the PM an edge to analysts his leadership quality. But for me , NA.. I wont waste a penny for that!
p/s You dont trust Merdeka polls anymore is it?
PM still rely on APCO (foreigners) for his 1M, do we really gain the true MERDEKA SPIRIT when now we are still relying on APCO (Foreigner) to unite us. WHt a crap!.

After more than 50 years of Independence, bribery and lackadaisical attitude is still deeply entrenched in our society. Worse still, nothing will ever happen and no action will be taken to the perpetrators because of their connection with powers that be or by simply having money.

We all should learn from the event of the last two weeks, if only, we could shake off our lackadaisical attitude, if only we check and investigate thoroughly all the reports lodged against the killers, Datuk Soosilawati might still be with us.

The other story of a philanthropist who clearly tried to bribe HRM Sultan of Johor in broad daylight or malam raya(as it were). He could call it a kind gesture but to most it is still a bribe. The philanthropist will go scot free because of his connections with the powers that-be or simply because of his wealth... Perhaps even simply because he have done many good deeds.... we the people will turn a blind eye.

I would not mind sending a postcard but being a Malay yang bersopan santun, I'd rather not. But I think he will get tons of postcards from my Indian and Chinese friends though. Must atleast be one from LKY. Namewee.

Me? I am yet to find something nice to say. I am desperate to be grateful to him actually.

I learnt from MR PM. I will play safe and not say or do anything.