(Another) Too late the hero. What is it about people like former judge 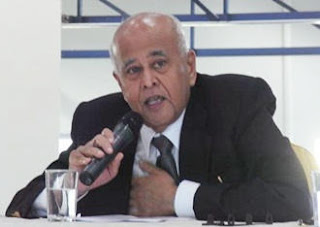 Gopal Sri Ram, who suddenly found the voice of righteousness to criticize their own profession only after they have safely retired from whatever it was they were happily doing? By all means, talk on as talk is cheap. People like Gopal Sri Ram should have rebelled against the system, they should have gotten out or die trying like a few actually did.


Yesterday, this former judge took a bitter (angry?) swipe at the Judiciary, which he served (and which, I'm sure, served him very well). Read H E R E. He condemned the Judiciary for being "too executive-minded". In one instance, he vilified his former brother Judges for  "reversing decisions through the Federal Court to accommodate the wishes of the federal government".*
If the system was as rotten as he claimed, why did he suffer it and stayed on? To try and change things from the inside?
Some will be hoping that Gopal Sri Ram will speak up more against the Judiciary. Well, good luck. I think the only one that will be exposed is Gopal Sri Ram himself. You see, he was not just part of the system, he was in a position to influence the system and change it if it was as bad as he'd painted it to be. Or maybe he did and if so, I stand corrected.
Judges are people of honor, wise men and women whose actions and words are supposed to lead the rest of us ordinary folk. Their judgment can send you to the gallows or render the ruling party illegal. If the Judiciary is not what it should be, they should do something and not go through the motions like normal people do. Say your piece now or forever hold your peace.
* Gopal Sri Ram, I think, is also referring to the Federal Court's decision to reverse the Court of Appeal's decision on UEM vs Genisys. Vested interest? The said Court of Appeal was chaired by Gopal Sri Ram. I happened to have written about the case on my blog and the business papers covered the case closely, too. Yes, it was thought to be a bizarre decision. No, not the Federal Court's judgment BUT the RM87 million decision by the Court of Appeal. In fact, the Federal Court found some aspects of Gopal Sri Ram's judgment "disturbing". Read my most recent posting on that case H E R E.