A big frog in a small pond 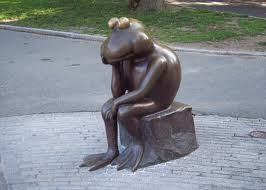 Here's my piece in today's The Malay Mail on Zaid Ibrahim and Big Frog in Small Pond, revised and edited. Enjoy! Dan .... 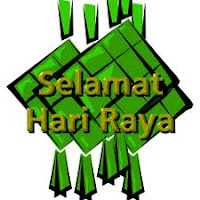 Have you ever bought something on the sheer strength of a marketing gimmick?
I think I might just have. I purchased a copy of Tom Plate's

"He is a big frog in a small pond. He is not satisfied with what he has. He had ambitions to become Prime Minister of all Malaysia .... But I think he will go down in history as a very remarkable intellectual and politician at the same time, which is not a very often thing." 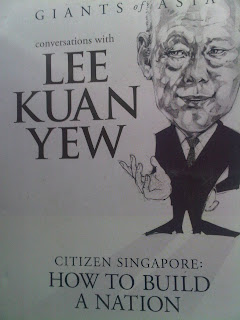 Half an hour into the book, and I realize that I may have bought the book half-expecting Dr M himself to write chapter, if only to indulge in calling Kuan Yew names, or for him to admit that Lee Kuan Yew was indeed too clever for the Malayan politicians back then, etc.
But I am not disappointed; the book has been a great read so far.
I have a feeling that Datuk Zaid Ibrahim may have fallen for a powerful gimmick when he joined the Parti Keadilan Rakyat, which is headed by Datuk Seri Anwar Ibrahim, the de facto leader of the ....

This is what my teacher says as "karangan tergantung"...

Dear Lordapes, I dozed off for seconds writing that piece for tomorrow's column in the Malay Mail. The post-buka puasa sleepiness.

Yes, I write my column on my blog.

Since you have kindly placed a comment here, I suppose i'll let it be. A propmo - a gimmick, if you like - for my column Rocky's Bru on Thursday in the Malay Mail tomorrow.

A Big frog from a Hyper Huge pond...

Jump jump jump and found solace in a small pond...

Lee Kuan Yew fathered the Asian Command Democracy..It worked well. The model was emulated by Communist Party of People Republic of China to govern that vast country, when the country raised its bamboo curtain and it works as well. Barisan Nasional could have applied the same model to rule this country ......but it is too late... When Tun Lah took the helm he set loose a pack of marauding wolves among the flock of sheep. Now UMNO, MCA and MIC look like poodles...they can only whinning...

It's funny. Zaid Ibrahim is in politics and he's screaming other politicians are playing dirty.

This blog piece is way too cool ;-)

Selamat Hari Raya, RetroGina. May you be happy always.

Hell may sound as above heaven until you come to the senses. Hell is Hell, period, why did you not see it in the first place? Of course, everybody is blinded by the light, when he is blind!

Read the earlier version of this post. Thot it was weird and incomplete. Strange and so uncharacteristic of you. You really dozed off?

As hundreds or thousands will be crashing their vehicles in the balik kampung exodus, lets leave them to be.

For those who do not crash their vehicles, Selamat Hari Raya and leave politics aside temporarily.

The fights can continue next week!

Salam Dato'
Rocky's Bru is one of the good quality blogs from Malaysia, and the blogosphere is the richer because of you. Thank you for your efforts here.

I have an idea - why don't you give a brief summarization of this book here on your blog. That way your fans can get to benefit. Books are soooo expensive nowadays; most cost at least 40 ringgit - and that is sufficient to feed a family for almost a week! Konon-nya banyak2 orang tak mampu membeli buku2 - itu merupakan suata luxury lah - sebab gaji kami terlalu rendah!

Yes, the Singapore story. Tis Raya we must reflect, why is it that more than five decades ago, Malaysia had a larger GDP than Singapore, a larger stock market then them. We are blessed with rubber, oil, and palm oil, yet we have laggard economically.
Today, Singapore is a first world country in terms of the populations average income, and we are still stuck in the third world hole.
Once upon a time, we were hailed as an Asian TIGER, and those glorified with us as Tigers- South Korea and Taiwan, have made it to the developed nation status.
Yet here we are still in the developing stage, the emerging ruckus.
Economically, we are like the teenager, now a grown man, who is still stuck in form five, because we cannot pass the SPM examinations.
I dont care about Singapore, I dont care about LKY. I care about Malaysia, my motherland.
So we must ask ourselves, why as a nation we have failed ourselves, when the almighty have blessed us with a land flushed with milk and honey.
Looking back, we were the nation with so much promise, that delivered so little.
Who stole our wealth, who made us poorer (the rm and sing dollar were on par, once upon a time)?
Was it an ememy at the gates, was it an enemy from within, or was it our own brothers and sisters, who plunder, rape and torment us daily?
We care not, what Singapore is or will be, or who is greater LKY or Tun Mahatir.
We are, what we are today is because of our leaders.
Never in history, has a nation with so plenty, been let down time and again, by the so few in power.

Salam Eid al-Fitr, to all.

Anonymous said...
This comment has been removed by a blog administrator.
2:39 pm

Ross, Selamat hari raya. I will attempt a review of books I've read, insyallah. Thank you for the suggestion.

Thanks Kenn, cool blog you have. Selamat Hari Raya.

Thanks for returning to wish me Selamat Hari Raya. Yes, I literally dozed of on the keyboards! Nasib seorang bloggah!

AGoodManDN,
Good idea on burying politics in the rendang for a while.

1. Loaded phrase tu Dato',"a big frog in a small pond". I think this is probably the end of the political road for Zaid. Best he establish an NGO and write more books to promote his values, forget about politics, its a dirty game. If Zaid complains about the dirty tactics than he has no place in politics for sure.

If you have an expirience with making graphic to web on-line shop please let me know.
I'm looking for somebady hwo can create and implement graphics to on-line shop.

RAYA Deals: Time to let the dog out!!

10 SEPTEMBER 2010
And, more importantly, it appears like the current Prime Minister, Najib Tun Razak, is giving his tacit approval for Tajudin Ramli, Rahman Maidin and Halim Saad to sing like a canary and finger Umno, Dr Mahathir and Tun Daim Zainuddin as the real rogues behind the plundering of billions of Ringgit of taxpayers’ money.—Raja Petra Kamarudin in his latest posting

This is Monsterball wishing Rocky SELAMAT HARI RAYA.!!!
May the years to come give him much peace and happiness and daughter's health... getting better.

Well, Rocky - was it so hard for you to admit, albeit grudgingly, that LKY achieved great things for Singapore after being chucked out of Malaysia?

And a Selamat Hari Raya Eid ul-Fitri to you!

And may sanity and good sense prevail in the US, given the heightened emotions surrounding the anniversary of 9/11.

Well, Pak Rocky - I was waiting for LKY's riposte to TDM's comments on Malays in Singapore.

And, boy, did LKY hantam back in his interview with Seth Mydans in the New York Times, excerpts of which were published in the Spore Straits Times today!

LKY's latest comments will no doubt be viewed as extremely controversial by certain quarters in Malaysia.

But he chose a good forum - The New York Times is part of the essential reading in the White House and amongst the American business elite and Wall Street barons - constituencies where LKY has much more of a positive reputation than, say, TDM!

Will you be excerpting comments from the LKY New York Times interview in your blog? Seeing as you are not one to shy away from controversy!

LKY regret being PM of Singapore too small for him to swallow. He want to be PM of Malaysia because he thinks that he can same things what he did to Singapore to marginalise the Malays using meritrocracy as excuse. Look araound how Malays being treated at Armed Forces, government agency, economics. Why Yusoff Ishak Secondary School no a controlled government school to show respect of 1st President Of SIngapore. Why Gan Eng Seng can be made controll secondary School. Malay are not given a chance to explore more. Why LKY still remain as MM of Singapore because LKY wants to enjoy immunity being dictatorship.