Most of our ministers won't even think of engaging protesters. But Anifah Aman, the Foreign Minister, walked straight up to the protesters and had a chat with them, and not about the weather. Now, I'm sure we all can respect that. 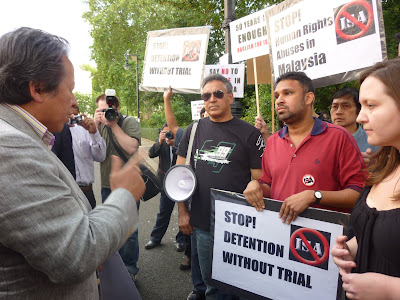 pic of Anifah Aman making a point with The Bodyguard (dark glasses, of course), Joseph Benedict, and Yolanda Augustine.


Foreign Minister squares off with anti-ISA protesters in London.

by The Malay Mail correspondent in the UK
London: Twenty people turned up in front of the Malaysian High Commission in Belgrave Square last Sunday evening for an anti-ISA protest. One of them was one of Raja Petra Kamaruddin's bodyguards, known as Ben Singh. All holding placards bearing the messages 'Stop Detention without trial', '50 years is long enough', 'No to torture' and 'ISA haram di sisi agama Islam'. One demonstrator dressed in a detainee’s uniform, stood on a crate and wrapped a black plastic across his mouth and neck. Most were wearing t-shirts and cargo trousers on that balmy summer evening. A few were holding candles and there was a big yellow banner with Abolish ISA on it. 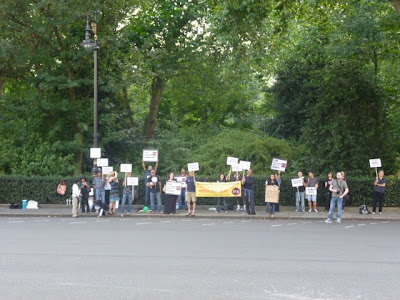 Ben Singh, who shot to prominence as RPK's bodyguard during a recent public appearance here by the ex-ISA detainee, and one Augustine Yolanda, led the chants "Down, down the ISA", "No detention without trial", "Release all detainees now", and "Mansuhkan ISA".

A police car parked nearby with 2 police officers watching the proceeding. The chanting could be heard around the Square but being Sunday evening, hardly anyone was in the embassies or offices nearby. Only a few cars and taxis passed the street. Even the police car drove off after a while.

Across the road, Malaysian officials and visitors to the Malaysian High Commission stopped to watch them before entering the building to attend a talk by the Foreign Minister, Datuk Seri Anifah Aman.  The Minister arrived and along with the High Commission’s officials, met up with the demonstrators.

Yolanda: "We are still very concerned about the way Malaysia still refuses to repeal the ISA despite having said that in April 2009. Datuk Seri Najib said that this is something that he will look into seriously. Since then Malaysia has been elected to the UN Human Rights council, many comments were made about the Human Rights in Malaysia but until now we have not seen anything move forward."

Datuk Seri Anifah Aman: "We are now talking to all the stake holders. We do not want to rush things. If we rush things after the bill has been passed in the parliament, there will be some parties who are dissatisfied with them. Although we can't fully satisfy the people, hopefully it would be acceptable."

Yolanda: "Why last Sunday were the police so fast to crack down on the candle light vigil by peaceful protesters in Malaysia. That is something we don't understand. Nothing of concerned but police arrested 38 people."

Datuk Seri Anifah: " I cannot give you the answer to that because I was away."

Yolanda: " I think the government need to take responsibility for this. Also the fact that communist insurgency was actually finished and it is way too long for us to keep seeing the ISA being used. "

Datuk Seri Anifah: " Yes, at the end of the day ... the ISA now is fully for terrorism."

The Bodyguard: "For 50 years people are being detained. Are you telling me that every body was a threat to national security?"

Datuk Seri Anifah: "You cannot generalize. Maybe not everybody (is a terrorist) but there will be somebody. We have just deported 10 foreigners who were there (in Malaysia) ... their actions could have jeopardized the (country’s) security."

The Bodyguard: "Why do you detain people who criticize the government such as Raja Petra. Because he is exposing excesses of the government, the looting that's going on? That's one way to silence him?"

Datuk Seri Anifah: "You mentioned looting. You are passing a judgment. We do have a judiciary."

The Bodyguard: "I didn't pass any judgment."

Joseph Benedict: "In the future we want an abolishment to ISA, right now at least an amendment."

Datuk Seri Anifah: "You do not know the consequences, how serious it is - terrorism. In our country, these people came and recruit the students from universities, Nordin Mat Top and Azahari, because we are not able to apprehend them, they have caused a lot of deaths.”

Joseph: “ But based on human rights we need to stop torture. We will continue and will keep pressuring you and the Malaysian government.”

Datuk Seri Anifah: “ Please do that. It is within your rights. I am equally concerned. I am no difference from you.”

Datuk Seri Anifah, when asked again on why Malaysians couldn’t hold the candlelight vigil on August 1: "There were people, not from the protest groups, who wanted to make use of the gathering for their own purposes. The police were compelled to prohibit them from going through this vigil because there was information that something untoward may happen.”

Another protester Andrew Yong said Malaysia to allow freedom of speech, assembly and peaceful protest if it was to be prevented from spiraling towards a police state, like that of Zimbabwe.

Datuk Seri Anifah: “That’s what I am angry about. You are comparing Malaysia with Zimbabwe. Why not compare us with America or Britain?"

The 20 minute open engagement ended with handshakes. Datuk Seri Anifah was in the UK and Europe for a 10 day working visit. Last week he met with the UK Foreign Secretary William Hague, to discuss bilateral relations.