Updates: Syed Akbar Ali on the friends Anwar keeps (Yusuf al-Qardhawi, a village idiot from Egypt who married a girl younger than his youngest grand daughter; Al Gore, conman and genocidal maniac par excellence; and Wolfowitz, arch neo-con who has the blood of hundreds of thousands of Iraqis on his hands) and his RM7 million mansion in Selayang. 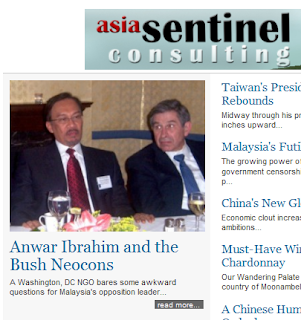 
Anwar has previously disavowed any US funding of the organization, established in 2005 as "an essential front on the global war on terror" and part of President George Bush's "freedom agenda" to promote democracy and reform in the Middle East and Africa. Anwar served as chairman and acting president of the organization's board in the period when he was out of politics following his incarceration on corruption and sexual perversion charges.

The Government Accountability Project report lends considerable ammunition to Anwar's opponents in the United Malays National Organization, who have long charged that Anwar was connected to the US Central Intelligence Agency, although neither the CIA nor the US government as a whole has ever exhibited any particular desire to bring down the Malaysian government, and in fact considers Malaysia, as a moderate Muslim democracy, to be one of its staunchest allies in the region.

In particular, UMNO Youth Chief Kairy Jamaluddin called attention to Anwar's statements disavowing US funding of the foundation and demanded that Anwar explain himself. He accused Anwar of misleading the US government in a memorandum of understanding saying the foundation had agreed to get other countries to commit funds to match those the US government was providing.

"For me, it is a serious matter that the opposition leader has tried to mislead the US government to get grants for a foundation that he was chairman of," Khairy told the Malaysian newspaper The Star.

An Anwar associate said the opposition leader would decline to comment, adding that there was little to be gained by saying anything about the matter. Nonetheless, he characterized Anwar's role as blameless.

"There is nothing wrong going on," he said. "This is part of the campaign to get Wolfowitz out of the World Bank and to do so they threw Anwar under the bus."