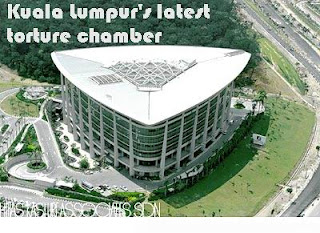 The SC's investigation officers are running amok. Yesterday, at the end of a 3-hour session with BK Sidhu, the Star journalist, the attending IO named Arif demanded that Sidhu surrender her notes to him. Sidhu had been taking notes of the Q & A, perhaps out of habit or maybe to ensure against being misquoted. She refused to hand over her notes, of course. Arif then told the lawyer representing Sidhu and The Star, Mr Tharminder Singh, to sign a statement of the proceedings. Tharminder, I was told, refused to do so because he was there just as an observer. He had been told earlier to sit quietly in the Q & A room and not to offer any advice to Sidhu. He offered no advice to his client, whatsoever, even when Sidhu refused to give up her notes to Arif.

That was when the SC's officer issues a notice under this powerful Section 134 to Mr Singh, which would compel the lawyer to come back tomorrow (Thursday) to face the SC's "firing squad".

The Star wrote to SC yesterday advising it to withdraw the notice issued to Mr Singh, or face legal action.

Is Zarinah Anwar so powerful? Based on the powers vested on the SC chairman under Section 134 of the Securities Commission Act 1993, yes she is so powerful. Bujai, a journalist of nearly three decades, wrote in his latest posting here that Zarinah is so powerful that he does not expect the Prime Minister or the Finance Minister to be able to do anything to stop her from terrorising the journos.

Do journalists need protection? The Centre for Independent Journalsim (CIJ) says Section 134 is so open to abuse. Read it here or visit the CIJ's website for their press release entitled SC interrogation shows need for journalist protection.