updated
Kuala Lumpur, Mon 27 June: Malaysian Reserve's Dalila Abu Bakar is the third journalist to be interrogated by the SC at its headquarters in Bukit Kiara at 11am this morning.

Despite the mainstream newspapers "assisting" SC to cover their incompetence and impropriety under pretext of public relation, SC treated these business journalists badly and all MSM newspaper should boycott and blackout SC in protest.

There is no basis for SC to subject the journalist for such long and suspiciously abusive interrogation. They are merely reporting the event and are not suspected offenders."

Big Dog digs up a bit about the SC chairman's record ..


1. Reports were made to the SC against the ‘merger’. Nothing avail. At least 17 reports were filed by minority shareholders alone. At best, the complainants got an acknowledgement for their complaints. Even three police reports were filed. The commercial crime policemen did the proper thing; They forwarded the police reports to the subject matter expert: The Securities Commission. Guess what? SC did nothing. SC allowed the highly controversial and irregular merger to go on.

2. The more recent is the case about MyEG.com. One of the players whose company comprises part of consortium which provided service for the online service provider for Malaysian Government counter services, one Singaporean Mr S K Ong pleaded guilty under Singaporean Sect 97 (1) of the Securities Industries Act in 1999. And yet S K Ong as a white collar criminal was an active shareholder and partner of Paxelent Corporation Bhd. How could SC allow such a person hold position in a plc, moreover which provide wholesale online services on behalf of the Federal Government? This was notified to the SC but then again, non avail

Securities Commission gets rough with journos. Ms BK Sidhu, the Star's seasoned business journalist, was hauled in for questioning for eight straight hours on Wednesday. This is unprecedented. Another journalist Azlan Abu Bakar from the Business Times went in the next day. Two other journalists, Dalila Abu Bakar (not related to Azlan) and Ishun P. Ahmad of The Malaysian Reserve, will get their turn on Monday.

All have been reporting on Kenmark lately. This company saw the re-emergence of controversial corporate player Ishak Ismail of the KFC fame recently. We know the SC and Ishak have crossed swords, the latest just last week when the SC obtained an ex parte injunction against Ishak here.
Malaysian journos don't normally mind being at the wrong end of an interrogation. We don't turn our backs if we know we can help in an investigation, especially if it's to solve a crime.  But no need for the high-handedness lah. The SC investigating officers must also remember that journalists not only have the 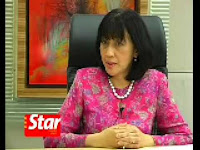 responsibility of telling the truth but they also need to protect their sources. If we don't protect our sources, who'd want to talk to us? And if people don't talk to us, how are we going to our job?