John Soh, a big corporate name in the 90s, is a dear friend and strong supporter of brother Anwar but Free MT's journalists say they are trying to stay faithful to journalism's credos of being fair and truthful. John Soh is also a loyal backer of B.U.M since it started as Bloggers United Malaysia in 2007. It is now known as Bloggers Universe Malaysia. 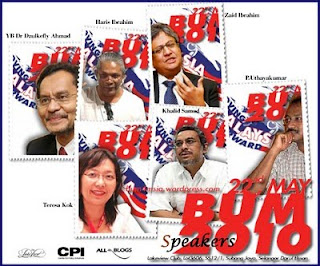 B.U.M 2010 is happening this Saturday 22 May at Subang Jaya, featuring FT & UW Minister Raja Nong Chik and Selangor Menteri Besar Khalid Ibrahim, among others. To Register for this event, please click here.

John, I want my money back.

Is he related to Soh Chin Aun?

Before, we dig about Soh, Rocky, why dont we dig a lil about Najib's lil CINAMAN -TAEK JHO LOW. Never HEARD of him?

Taek Jho Low, a 20-something Wharton grad from Malaysia who has burned through hundreds of thousands of dollars at the city's hottest nightspots in the last three months.

In September, during Fashion Week, sources said, Low helped rack up a $160,000 bar tab at Avenue, including several $900 bottles of Cristal champagne.


At chic 27th Street hangout Pink Elephant, Low routinely spends $50,000 to $60,000, according to the club's owner, David Sarner. One night, at the Pink Elephant outpost in Southampton, Low enjoyed himself so much that he kept the revelry going -- all the way to Malaysia, Sarner said.

"He ended up flying eight of our [waitresses] to Malaysia for a party," he added.


According to his official biography, he currently serves as a group adviser of several international corporations and was appointed to the board of UBG Berhad, a financial-services group in Kuala Lumpur, last year.

According to inside sources, Low lives at a $100,000-a-month apartment in the Park Imperial, on West 56th Street, home to James Bond actor Daniel Craig and Sean "P. Diddy" Combs -- and he won't go anywhere, not even on the elevator, without at least one bodyguard.

Some of Low's entourage of eight to 12 people also reside in two other apartments at the Park Imperial -- a $30,000-a-month pad and a 2,200-square-foot loft with Central Park views that costs $20,000 a month, according to real-estate investor Michael Hirtenstein, who used to live in the latter.

BY, the way this BANGSAT is also involved in selling government land to private parties. Kononnya BROKER.

Speculation is also brewing over where TAEK JHO LOW is getting his money.
One observer said: “Nobody spends their own money like that. It’s just WEIRD. - November 8th, 2009 -MALAY MAIL.

This CINA is using the petrol money from Trengganu (which should rightfully go to the development of hardcore POOR malays in the STATE) to fuel his EGO and LIBIDO.

Ah Latuk, so this is how you make your money over at New Shit Times and Melayu Mail. From a comment at Make time for Chou Z Lam:

"When I was at the New Shit Times, our boss and dictator Datuk Kadir Jasin, gave us the usual advice when he called us for meetings. His advice was plain and simple - anyone who felt that working for the NST, and by extension, the government, was a burden was free to fuck off. He was in fact telling us to do what he wanted us to do, that is to spread shameless propaganda. he promised arse-lickers more bonuses. Nothing has changed. In fact the situation is getting worse with Ahmad Talib at the helm. God help the Press. Only Pakatan can save us. Praise the Lord. "

Whatever that is said, everyone has their own inclination.

For instance, The Star and The Sun's reporting is usually more leaning towards the Chinese or DAP.

Utusan Melayu and The Malay Mail's reporting champions the Malay or UMNO.

Heck. The world media are controlled by the Jews.

rocky,
who is 'brother' Anwar? is he your 'brother'?

Dato',
what FMT? We are free long time ago. Worst crooks also free ma. Is he the same Bastard who swindle the poor man money. Yet he is still free but wanted talk about Free Malaysia. Go to fuck up the Fuckatan Rakyat la.
Latest news on TBH inquest via video conferencing at I-City. Wow that's awesome. One stone kill 1000 birds la. Everything the Fuckatan people is to their upmost advantage man.

Pornstrip must respect Malaysian People; Country and Laws. Why have to give in to her request. No To Video Converencing.

So what if TAEK JHO LOW like to play with Malay people money and fuck their women? You jealous is it?

Taek Jho Low has got heavy Singapore connections. He has an office near Khazanah Nasional. He is also a regular at Traders Hotel. He is close to Najib's brother Nazir and Nizam. Infact, Nizam was the"ARABIAN FUND" which bought into CMS Bhd.
I pity Najib, because both his brothers are forcing him to allow a Singapore OPERATIVE to operate here in Malaysia.
Jho Low, grew into prominese during Pak Lah's time under recommendation of Kali, Kean Onn and KJ.
Just like Tong, the owner of Edge and one on Anwar's BACK room boys, Jho Low is in the inner circle now, because Nazir razak vouched for him to his brother who happens to be the PM.

Taek Jho Low is a brilliant guy. Malays are jealous of his success.What a JEALOUS people you are. Way to go Jho.

About 80 people protested against the sacking of Chou Z Lam, TV2's producer of "Galeri Mandarin Nasional", at RTM Angkasapuri this morning.

Chou was sacked after he went public after his documentary about the impact of Bakun Dam on the indigenous people was axed.

Moved over to the Bright Side already, Bru, the last post notwithstanding ;0D.
Godfather must be chuffed to bits.

Bet the sun is shining real bright there, so bright that even bum universe's combined light bulbs of of supernovas, white dwarfs, nebulae et al cannot illuminate enough the fact that 5 of the postage stamps on that poster bear the likeness of munafiks, toddyholics, christo nuns and kaffirs. The dregs of society about to preach the gutter to the mesmerised. Anyway, not surprising as BUM, minus probably you, is infested with opposition garbage masquerading as a civilised society of neutral scumbags.

Hope u keep ur journalistic credo from being unsoiled by all that but stranger things have happened ;D and wont bet a glass of sake on that.

Take the sarcasm with a pinch of salt and a touch of sugar and chill out with a glass of lager.