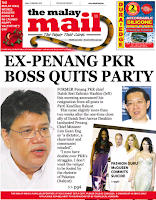 "I Quit"! The decision by Zahrain Mohd Hashim, a strong Anwar Ibrahim ally for the last 3 decades, to leave PKR did not come as a surprise. He made it no secret that he has lost confidence in Anwar and "communist-minded" Lim Guan Eng and so the most logical thing in order for him to still serve the people as Bayan Baru MP is to quit the fragile coalition.

No, he did not quit to join Umno and BN. Which is a good thing. For Umno/BN, I mean, but that's my view as someone who's not an Umno member.

Next will be Zulkifly Noordin, Tan Tee Beng and Wee Choo Keong, all the rotten apples must go...

PKR must do a spring cleaning in order to save the party.

It has been sometime since I last visited your blog. Guess you have updated your profile.
You should also include this, "former critic and current propagandist of Barisan Nasional government who has been bestowed with datukship". I'm sure it'll fit you well.

An ex-UMNO warlord used to dictating to a docile MCA and Gerakan, he found YB Lim Guan Eng a strong and upright leader who simply cannot entertain his "demands";therefore, the CM must be dictatorial!To his confused and indoctrinated mind, giving priority to the poors and marginalized means that the CM is "communist-minded".Ignoring his "warlord demands" means that the CM is arrogant!PKR is better off without him and his kinds!

"Anwar sodomy charges hard to believe"- Australian MPs. You can fool some people, but not all will believe your cerita dongeng. Rule of Law must be restored in this country for foreigners to have the confidence to invest again in Malaysia. We cannot be ruled by law of an elite group. That is Feudalism, not democracy. Listen to your inner conscience Rocky, bertaubatlah! Nobody is buying your story. BN is just digging its own grave even deeper. People will punish you and the real brains of this country will leave for places where they will be free from the yoke of oppression. May the conspirators rot in the lowest of hells!

Of course I too would lose confidence in Anwar if he cannot even do a simple thing like getting a contract for my son....errr...I got no son...so how eh?

Sure, we could use the RM 1.8 billion Scorpene Submarine to fish for sardines!!

Inability to fly will not hamper flight of jet engines to Uruguay!! Ha, ha, ha!

And inability to think will not affect Minister's position in Cabinet!! Muahaha!

dpp
We are all of 1 race, the Human Race

People like these who hop from one party to another can never be trusted. Thus PKR are probably relieved he has jumped - so they can now field a better candidate at the next election.
And UMNO would be unwise to take him - as he will be disruptive and cause division in the constituency.
As for the Perak Frogs - their political careers are over as UMNO will desert them come the next legislative election.
Good riddance to bad rubbish....

Good riddance bad rubbish.Most probably he knows, he is just a 1 term wonder and his days are numbered, so what better way to make hay while the sun shines? Slowly wriggle one's way under Umno's armpits?

Funny how you did not highlight that the reason he said all those stuff to LGE is just because LGE refuses to let Zahrain secure a contract using a 2 ringgit company. I say good riddance to him.

He fit into the UMNO agenda well, $2 company culture. PR cannot have people like him, LGE had done a great service to the people of Penang by exposing the wolf tail of Zahrain.

we, malaysians, who are loyal to the country, must just proceed making the country better, starting with ourselves, our families, our neighbours, and our surroundings;

cut the rhetorics of politicians from any side;

i bet, the PR people dont want Justice, Improvements, Efficiencies, Non-Corruptions, if its by BN. They just want PR to rule, at any cost, at any expenses;

how sincere is that?

BN is not najib, BN is not mahathir, BN is not badawi. BN is ours, it is us, it is the one we shape to where we are today;

its crooked because we are crooked.

grab hold of it, steadfast, fix it, repair it, lead it to goodness and honesty, and shape it to lead malaysia to excellence. dont complain and whining, but participate. get involved.

we are almost there. discard all those with personal agenda like anwar, or family empires like LKS and LGE, and people who uses religions to get power, like tok gurus.

focus on ourselves, on our own needs, our country. build it up, and protect it jealously from any elements who wants to crush it, even if it may comes in camouflage of people who wants to "protect" us like RPK, Hindraf Leaders, etc.

things are not what it sems. love your family, love peace.

go back to your primary school reunions to wake up your senses again. your purity. your common sense, who is ahmad, who is ah chong, who is muthusamy. people on the streets. making ends meet. we were there before, and it was lovely. no limit and no boundary. unique malaysian flavour.

this is OUR house, if it leaks, lets repair it. dont let others break it. we have one and only malaysia. no other malaysia.

most of us dont have options to run to london or india, protected by the western governments with multiple passports in hands, like RPK and Hindraf leaders. most of us on the streets cant even afford a passport.

You think rakyat will elect him the next GENERAL ELECTION,,,????

Malay Politician is a SUBSIDY POLITICIAN.

MY advise to LGE,,strike off all the post given to him,,,biar dia rasa without any position,,!!!

LGE is a commie.. plain and simple. A Racist and only believe in Chinese agenda. Zahrain left because LGE is all those things. PAS as LGE lapdogs will agree with anything LGE does. Malays in Penang are fed-up with LGE.
In penang, if a Malay can afford to have some luxury, the DAP Chinese not happy.. a lot of labelling will occur. But if Chinese can afford, then it's consider normal thing. LGE is never about equality to all Malaysians. He doesn't know what muhibbah is all about. He doesn't care about the spirit of Malaysia, of keeping all races happy and harmonious under one roof. LGE=Chauvinist=Communist=DAP

Yes all the rotten apples must go. Never knew there are so many of these apples nowadays. I guess it must be from a rotting apple tree.

Dato,do not be disturbed and disheartened from comments posted by worms and bugs living from this apple tree. They are only good as fish baits.

Its not a question of failure to entertain demands from Zaharain that triggers his exit. What we have here is failure to communicete due to lack of quality leadership. After years and years of housemanship in the opposition scenario, LGE simply do not possess what it takes to be a ketua menteri.

The PR claims to be the better goverment if and when given the mandate by the rakyat. What happened? Who to discredit and blamed in YB Zaharain's exit. As a matter of course-its the previous goverment. A phrase synonym to LGE. To the likes of Zaharain I say welcome to civilisation.

>>Malays in Penang are fed-up with LGE.

It's the job. When we became journalists, we were told that we needed to be as neutral as we could. If I were a DAP member, susah lah for an Umno member to give me an interview. So we - most of us, at least - never became party members.

to anon 1.15am who called himself 'malaysial': watch your tounge or someday you might be wearing it round your neck' and that's a promise.

Rocky, how can you vote? You are a Pendatang, a very late one. I know of people whose wife live in Malaysia on visa for years and still cannot get they blue IC. You a new Pendatang now already got Datuk, how can you did that?

At the end of the day.
All those (no matter FROM which party-lah) who cheated the poor and really marginalised will be PUNISHED by the God of the marginalised.

Dear Datuk,
I believe Lim GUan ENg should improve on his leadership capabilities.
He cannot be losing his subordinates and say that he is a good leader.
Sane people judge by results, not perception.
If he continues like this, I believe the Malays will run away from him and he will be a CM for the chinese only.
We want a strong 2 party system for ALL Malaysians, not just Chinese.
COme on PR,we can do better than this.
Ms.Eu MEi FAtt.

The political death end for Zahrain. He won't win the next election if he join a new party or stand on BN ticket.

His only wish is to support UMNO and hope Penang will go back to the BN days and use his RM2 company to cheat the tax payer in Penang.

I am a Malay from Penang and I am happy to see many Malay business man are able to win contract without the Alibaba culture of previous BN state govt. This is the way to go for us Malays. Thank you LGE.

How come when a PKR pr PR rep 'bares all', talking about Anwar "Mat King Leather" Ibrahim is a LIAR and LGE is a "dictator, chauvinist and communist", the PR hopefuls simply cannot accept that?

They even ask the rep to quit as a YB so that fresh elections can be held, in the name of 'democracy' and 'right of the voters'.

Hpw cp,e pf these ppl talk about these BN MPs constituencies needed by-elections, when Anwar claimed they were ready to suppoty him?

MALAYSIAL...why dont u packup your stuff and move there!!!!! Throw in your family & friends while u at it.

good luck to bad rubbish. And also I am wondering how the selection of dutukship is given. There are many who deserve more than others. Looks like UMNO and BN people gets all these title until these title seems like rubbish

u think that WE-PKR should accept all u crap....like...calling Anwar "Mat King Leather" Ibrahim is a LIAR and LGE is a "dictator, chauvinist and communist"..

LGE uses open tender and more bumi contractors win....CHECK OUT THIS FACT..SHOW ME ONE BN POLITICIAN WHO HAS SHOWN IMPROVEMENT,

"Mat King Leather" is what Anwar calls himself in a phonecall to Meor.

"Dictator, chauvinist and communist" are words what Zahrain said to describe LGE in the media conference, which I attended.

These are not words I create! Amd this is at all not about BN!

These are blatants, of PR leaders! That's why 8 PR YBs either left PR or quit as representatives already.

And guess what, more are expected! Lets bet whether any of the ones leaving WILL NOT HAVE ANYTHING BAD TO SAY about Anwar and/or LGE.