30 Nov: Art responds to Bru: Justice is an Illusion 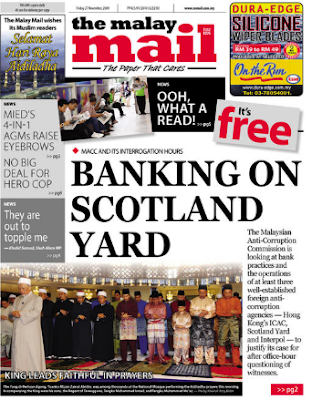 Original Article 27 Nov:
Why MACC tak boleh? There must be a good reason why Scotland Yard,

Hong Kong's ICAC and Interpol still stick to the practice of questioning withnesses after hours, right? If indeed they still do and according The Malay Mail this afternoon, that is the case.

The paper also says the Malaysian Anti-Corruption Commission is going to use this to appeal last week's controversial High Court ruling that the commission could only question witnesses during office hours.

Read the report by The Paper That Cares h e r e.

On 19/11, the Attorney-General said he would appeal the ruling. The Cabinet is also expected to discuss the ruling, which has already inspired DAP stalwart Karpal Singh to also demand that police stop "interrogating" witnesses after office hours. The Inspector-General of Police has said the High Court ruling did not affect the police but Karpal thinks it did [Karpal wants IGP to stop after-hours interrogation, The Star 20 Nov].

Well, I agree with blogger Syed Akbar Ali that in this case, the Court has acted really weird.

Now the Court has again ruled that the MACC cannot question or interrogate suspects outside of office hours. This is a stupid decision. So lets play with the permutations. Is it Government office hours or the suspects' office hours? A suspect could be a shift worker somewhere and work from midnite to 8 am. That is the time the MACC sleeps. To interrogate such a person during the MACC’s office hours (9am – 5pm?) may violate the suspect’s sleep time. What if the MACC decides to operate 24 hours like the 7-11 or mamak nasi kandar outlets? And they get their new ‘Dibuka 24 Jam’ office hours gazetted too? Or does the Court’s decision make it impossible for the MACC (and by extension the whole security apparatus of the country) to set its own time to do things?