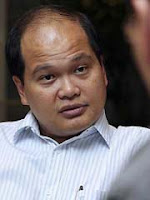 First, the good news: Razeek Hussain, 51, has been made CEO of MRCB, ending speculation that the post could go to ex-4th floor exec Ahmad Zaki Zahid.

Now, the other good news: Ex-MRCB boss Shahril Ridza Ridzuan (pic), 39, will be made Deputy CEO of the Employees Provident Fund [not Chief Investment Officer as reported here] in charge of Investments, effective Dec 1.

Shahrir was sent to MRCB (together with Abdul Rahman Ahmad) to help revive the corporation after the end-90s currency crisis. Rahman went on to turn around Media Prima (and recently to Equinas) while Shahril stayed to lead MRCB. When Dr Mahathir, then the PM, sent the two young men out into the harsh business environment, one of his advices to them was, "Don't do side deals".