Ex-4th Floor to be awarded with top MRCB job? 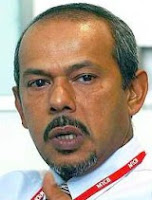 Nor Mohamed Yakcop should get a pay cut? Read H E R E

Updated, 12/11/09: Just a day after quoting sources that Ahmad Zaki Zahid was to take over the MRCB helm, the Star has quoted sources (different sources, kot) that the ex-4th Floor operative will not be the one, not immediately at least. The job's going to the guy in the pic. Read the Star's double-take, h e r e.

Original article 11/11/09
Ahmad Zaki Zahid. During Pak Lah's rule, one of the most powerful groups of people were operating from the 4th floor of the PM's Department in Putrajaya. Most of them may be brilliant but they were inexperienced, young and brash. Legend had it that they could tell editors what to publish and what not do, decide who can see the PM, and determine the future of politicians. They were answerable to no one 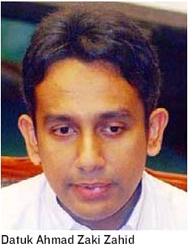 other than the PM, his SILhouette* and a certain kali barut of Singapore.

Most of the key members of the 4th Floor have gone under after Pak Lah's exit. We hardly hear of them. Recently I saw Zaki, who is a key member of KJ's Umno Youth, on Astro Awani commenting on Najib's Budget 2020 with Tony Pua. I thought he articulated his thoughts on the budget quite well but I'm sure that's not enough to make him a frontrunner for the top job at MRCB.

Someone brilliant, young but not so brash - and someone without a 4th Floor baggage - should be auditioned for the job. If the government is serious in scouting for really capable and talented Malaysians, it has to start looking outside of the box of current talents.

Read more about who Zaki is, the origin of 4th FLoor, and how much MRCB's worth h e r e.

* a term borrowed from a commenter