Original posting
NST 27/05: Mat Selamat Kastari, caught by police after escaping from Singapore, has been detained under the ISA for two years in Kamunting. 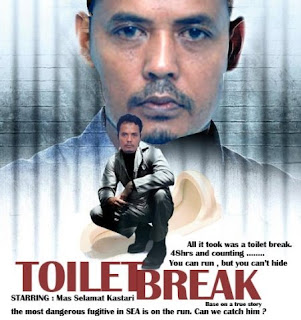 Safe in ISA. This officially makes Mas Selamat the first person to be detained without trial under the Najib Administration.

I wonder why the Home Minister did it. Finders keepers? I mean, Najib has released 26 detainees from the ISA since he became PM early last month so why spoil that record by sending to Kamunting this alleged terrorist who escaped a high-security prison in Singapore?

1. Maybe Singapore is too embarrassed to take back Selamat;
2. Just imagine Selamat being able to escape from Fortress Singapore;
3. Maybe the Singapore goal is not selamat enough to incarcerate Selamat;
4. Maybe Singapore wants save a few dollars a day feeding and clothing Selamat;
5. Maybe BG Lee said: “Bro., can you keep Selamat for me.”
6. What did Selamat do to harm Malaysia when he was in hiding in Johor?
7. If the new PM saw it fit to take over Selamat from Singapore and incarcerate him in our goal, should he not also be tough on the troublemakers at home?
8. He should incarcerate those who went abroad purportedly on self-imposed exile and run down the country from abroad;
9. We are so kind to our southern neighbour who is the target of terrorism. There must be something about Singapore that attracts “terrorists”.
Thank you.

SG gov has what Najib wanted and Najib has what SG gov wanted...

SG gov not giving Najib what he wanted (Mandarin Oriental Hotel @ Orchard Road pics/videos maybe?) so Najib put Mas Selamat in Kamunting where it is out of reach from SG gov?

that's strange...thot he was gng to be extradite to S'pore

I agree with A. kadir Jasin.
We always give them clean water
They give us sewer.

where are all the shit people with the candle??????
go n gather n protest n say NO TO ISA,free mas selamat~he is no selamat there!!!

alot of malaysian Very stupid especially the one with candle....

wow rocky-u got his pic

The person running Home Ministry can even run the Education Ministry properly. So don't expect anything from him.

uhh rocky~this pic not so cool la...
this pic like model trying to sell hair product...
where is his bomb,c4 or at least a machine gun??

as much of my deepest respect for your late father.

Dont EVER! let your wife get involve or influence your decision.
.
.
lebihpercayaular@daptonto999years.com

Rusdi Mustapha @ Pasquale should tell his boss it is a mistake sending Bapak Mas to Kamunting.

Come to think of it, who is Rushdi. His boss didn't even listen to him when it comes to Ahmad Talib's appointment.

Salam Bro. Rocky,
Personally I thought Najib & Co. have been making "weird" decisions lately... I wonder why?... somebody's balls in somebody's hands... or virus KORO is still in somebody's body... whatever it is, its "spooky" to see the new gomen is making new "mess" on top of pak lah&co.'s really messy legacy...

isnt there sufficient evidence to put this man away for a very long time? why the need for ISA?

and after he has served his sentence, he can be handed over to Singapore for them to deal with him.

Just to show PR he means business.
Forward one step then backwards 3 steps, he is just like the Lalang

Najib is not being Kind to Singapore by feeding and caring for Mat Selamat, he is doing a kind deed for his Cussie Bro.

To A Kadir Jasin: it's gaol sir, not goal - quite an old fashioned way of referring to 'prison'.

First, the great escape from has many open ended questions.

How in heaven's name could a prisoner under no nonsense Singapore's tightest security do a Houdini? Did they want to let him swim over here on purpose? Or did they find out he did nothing wrong?

Now this brings out another question. How did RPK swim to Australia? Did Malaysia want to get rid of him or does Australia want more criminals in their population drive?

Something did not jell well during PM Najib's visit to SG, the bargaining chip was too small an offer for SG to even consider "something" in return.

While sneering at Singapore, do remember that we have our own share of terrorists:

Mohamed Amin Mohamed Razali led a band of 29 Al-Ma'unah men in a mission to overthrow the Malaysian government.

Dr. Azahari bin Husin -"Demolition Man". a Malaysian national and Islamic terrorist, was believed to be the technical mastermind behind the 2002 Bali bombing and various other Jemaah Islamiyah (JI) terrorist attacks. Azahari was killed in a police raid on his hideout in 2005.

Maybe Malaysia take in Mat Selamat, so that Singapore will take in RPK.
Quid pro quo.

Hello Mr Rocky,
We know u are UM-NO man!But u r a journalist!
An educated man like you should know that every man has to be tried and convicted of the crime. Why should Mat Selamt or anyone be imprisoned without trial?
Even so called 'backward country' like India and Indonesia can try their terrorist without violating human rights.
U will only kutuk if America did that. Now they also have decided not to have G.mo. Where are we heading to..Backwards or forward?!!

All along Singapore applied ISA to maintain peace and security. It is unheard of hues and cries by its citizen to review or revoke this law. It's very effective in keeping the peace including putting the threat by the terrorist, racial, political and religious extremist under control.

While certain group in Malaysian called this a draconian law and wised to be scrapped. Now certain Malaysians daringly come forward to demand the Malaysian Government to allow Chin Peng the CPM Secretary General to return and settle for good in Malaysia. They fail to look into the extreme threat of the socialist/communist ideologies on our populace.

A purportedly Malay by name of FAHMI has written by giving his nonsensical idea to support the Gerakan and others for the return of CHIN PENG.

I think we in Malaysia have other priorities to deal and for that matter I would suggest that let the idea of allowing CHIN PENG to return to Malaysia is placed outside these priorities and be demised.

Simple question, provided you have the guts to answer.

Are you pro ISA or are anti ISA?

A simple yes or no would do.

Mat Selamat should be on trial, not held up with ISA. Why is he held under ISA when he's wanted in other countries?

For 'his own protection' izzit?
lol

Abolish ISA, it's a crime against humanity.

The conversation as disclosed by the ex-PKR Aminah.

From these conversation, you can judge what type of quality of leaders PKR that will lead us if PR really govern the country:)))))))))


CAUTION: Chicken sound can be iritating

not bad looking this Mas Selamat

I can't understand this
Why is Malaysia feeding this alleged terrorist who is wanted in another country.
let him eat and s**t there.
Why are we housing him?
Lest we are protecting him!!
That is a thought you can't deny that may have crossed many minds.
I say send all criminals from other countries back to where they come from. Send them back to where they are wanted.
STOP wasting our tax payers money.

Maybe Najib can use Mas Selamat to blackmail SG government?

maybe malaysia is stupid enough to give him free food and shelter for next 2 years. after that he may get his PR when he step out of the door.

Isn't that malaysia is famous for producing terrorist? Go to indonesia, they will tell you who is the sifu of terrorist over there. MALAYSIA BOLEH!!!

How come the Singaporeans aren't asking for his extradition? Didn't he escape from them?

until ISA is abolished, nobody is Selamat and that includes you, rocky. wake up and subscribe to your conscience if there's one. money is the root to all evils.

Najib is helping Mat Selamat Kastari and doing him a big favor by keeping him safe.

Most importantly he is proving to the whole world that ISA is still needed in Malaysia.

Mas Selamat can be a bargaining chip

Chin Peng is not allowed back

Are we running out of CANDLES?

One man's terrorist is another man's freedom fighter

Mas Selamat should be allowed to give a speech

The sneering and sarcastic tone of AKJ adds another feather to his warped mindset. The first feather given to this ex-GE of NST was when he almost destroyed the paper until the board stepped in to tell him he has done enough damage. Do you think this kampung boy believe in 1Malaysia?

10. Maybe can keep him as bargaining chip in future, like water concessions? pictures or photos at some hotelwhere VIPs are seen gallivanting with missing women? Crooked straightened bridge etc.

mat selamat hensem la daripada irwan syah. for the poster, maybe u should dress him up in die hard 4.0 dressing..

Well, you got to always have a first before the second and the third and the fourth .......

Haha.. as always.. Singapore use Malaysia as a dump site

So Singapore might got a good amnesty report this year compared to Malaysia..as they not prison Mas Selamat without trial or use the ISA.

like my superhero Amir "The Malay Male" said - say no to say no to ISA...

or should we wait until the talibans kill and rape our child before we change our mind?

and i dont give a damn whoever being detained in Kemunting...