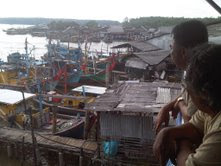 "Tonight at a riverside seafood restaurant in Kuala Sepetang, we'll see if the Chinese voters will swing to Barisan Nasional," said my taikor friend, a local boy who once was a major player in Malaysia's corporate sector.

"Victory will be decided there."

Sounds a little dramatic but after two days of mingling with the Chinese community leaders - the three of us (A Voice, Bujai and I) spent a whole afternoon yesterday at this very restaurant, which stands on stilts in waters the provide for Malays, Chinese and Indian fishermen - one can sense that a climax hovers near. The Chinese makes up a little over a quarter of the voters in Bukit Gantang, which was won by PAS in March last year.

Anifah Aman, an extremely popular BN politician from Sabah and Hamidah Osman, who played a major role in the takeover of Perak from Pakatan Rakyat, will be there. "If you think Nizar can speak Mandarin, you should listen to YB Anifah," my friend told me.

Two nights ago, at the Kuan Tee association's anniversary dinner, more than 5000 people turned up. The do at the Kuala Sepetang restaurant is mainly for the leaders of the Chinese community leaders who, according to the taikor, had supported Pakatan at the 12th General Election.