A most crucial assembly 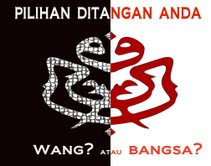 Reject Corrupt Leaders. The UMNO delegates start their assembly this evening. It is the first assembly since the General Election.

Its Wanita wing will choose its new leader, too.
[Shahrizat or Rafidah?].

Old ways, or Change for the Better?

On Thursday, they will elect the party's deputy president, vice presidents, and members of the Majlis Tertinggi.

Umno's survival, relevance, integrity depend on the leaders the members choose. The delegates know who the corrupt ones are. It's entirely up to them now.

JEEZ THERE WON'T BE ANY ELIGIBLE CANDIDATES LEFT!

I propose a faster, easier, cleaner, more clinical solution that affords a complete break from corruptive influence in all sectors of the government at the least cost: reject UMNO.

FROM ALL MAJOR NEWSPAPERS, NOW THE WHOLE WORLD THINK HE IS THE MOST CORRUPTED, PROMISCUOUS AND VIOLENT LEADER...

no money no talk

What do you expect when most of the elected delegates (ketua-ketua bahagian and timbalan) are also corrupted lot?

"A GOOD UMNO IS A DEAD UMNO"
The Assembly has no one to choose from, to get a clean leader, let alone, the whole line up!

BRO what if at opening of assembly PAK LAH say's saya dengan ini mengumumkan saya kekal sebagai PM,bet you there might be at least 40 heartattacks in pwtc.

that will mean no more parties left in the country to vote in the next election.

Read your second heading - REJECT CORRUPT LEADERS - there and I thought you were asking to close down UMNO!!!...Oh Boy...how silly of me to think that! You wouldn't have an assembly tomorrow would you?

Nice makan,nice staying place and top of that nice pocket money...what reject. I don t want to miss the same things or better next year.


All are corrupted what!

So ghost run the party la!

Money talks.
Wonder how is the Higher education minister going to pay for the hotel rooms?

First of all, the BN government has faced lots of critics and cynicism from the masses. I for one do not support either the opposition or the current government. Most of us Malaysians are rather pessimistic. What this country truly need are logical solutions to solve an equation, not criticisms that are based out of irrational/emotional thinking.

Coming either 2nd or 3rd April, it is highly speculated that PM Abdullah Badawi will step down and pave way to his incumbent, DPM Najib Razak. However, it will be an arduous task ultimately for Najib to restore the rakyat’s confidence in the BN government to lead this country out of this current volatile economical and political period.

His first undertaking should be to reshuffle the cabinet. All Cabinet Ministers are to resign at the behest of Najib. Doing so will remove tainted and power hungry leaders that are bent on staying in power. He is then to select them based not only on merits or track records but also someone that Najib can trust and work with. Furthermore, it is also important to choose a Minister that the Rakyat has faith and confidence in.

Such a system is practiced in countries such as Japan and Australia. It is for certain that we could emulate certain areas of their Cabinet reform structures that will effectively enhance the Government’s legislation.

Doing so, BN will project a credible image in the people’s mind proving that BN is upholding their commitment on listening to the rakyat. This is just but the first step to instill confidence and give a renewed vigor in the people’s faith as well boosting the integrity and legitimacy of the BN government.

And based on your perception Rocky, who is clean among those names you mentioned?

Or let me put it this way, who is the cleanest/less corrupt? Becos I don't think there is an answer for the question in its initial version.

And I don't expect the perwakilan to make any reports of money exchanging hands in the AGM. A few without positions will probably cook up something to get the opportunity and get their hands in the cookie jar. Poor Isa and Mohd Ali. But never mind, Muhd Taib made a comeback didn't he? Esok masih ada.

This brand of Ketuanan Melayu has left the fate of the Malays to the dogs, save a few UMNO slogans. That is what the UMNO AGM has been reduced to. It is NOT the place where the direction of the Malays is decided.

I believe we have seen this script a few years ago. And give a few more years, we'll see more of the same.

My guess: Muhyiddin, Mukhriz and sharizat will be the chosen one.

or special right ! whatever u wish to call it

now u tell them they cant have free money cos its bad !! They show u their middle finger !!

Putting aside UMNO's past and the fact that I voted for the opposition - I will thus try to be objective here:
A vibrant democracy actually demands a vibrant and renewed UMNO.
an UMNO that is inclusive to all; one that encourages debate and thought; moderate and temperate views; one that sees Malaysia in global terms and one that looks ahead rather than the past; an UMNO that must reject corruption and open to new ideas and willing to work with others.
This will not happen overnight but it must start from today.

Although I voted PR - I know that without an alternative that espouses and implements clean and transparence governence PR will go the same way as BN.

Anonymous,
All UMNO can do is elect corrupt leaders, as stated by TDM, VP candidates who cannot read or speak English. Wanita UMNO has not much choice, 'old hag'(SP Queen)or or proven corrupt bitch. On the Youth side of course the choice is even more limited, proven corrupt to the core ex-CM, proven without doubt money politics 'SIL'or lesser evil son of ex-PM.
What a party of devils!!!!who will be running this country...God Bless boleh land.
Pigs...Pigs...all around

Corrupt leaders?! Who's a clean one. Names please so we can judge. ..

As not professional political analyst, I suspects that the winner will be:

As the most suprise winner -

MM Taib - the new deputy chairman and also the DPM.

Since UMNO who now is 'United Money NO' soon they will become to 'United Monkey NO' becoz definitely rakyat will throw them in the next GE.

Sorry bro, whatever it is money is a chronic cancer for Majority UMNO delegates.

Anyone who expects Umno to change its spots are either mad, deranged, crazy or delusionary. Some things never change. It's business as usual. That means Umno will continue to sink deeper into the big hole they created. A new Umno? Kiss my arse. Who knows, Umno might make corruption legal.

Siapa yang tak corrupt ? can u name one? in UMNO, no money, no vote!

I am not a candidate, nor am I a delegate. But give me the Senior PM post.

And the more people like WanderAUS out there wishing for the death of Umno, the more Malays who are not even Umno members will come to its defence.

So don't stop WanderAUS cos you are doing a hell of a better job than the Umno fellas themselves in creating sympathy for the old faithful party of the Malays..

Can and will they close rank after the party elections? Considering the bitter and intense rivalry generated during the long campaigning period never seen in the history of UMNO it doesn't augur too well for the party.

DSNTR being the President has a mammoth task ahead of him and it will be his first real test of his true leadership qualities. I don't really envy his position.

You "read in disbelief" but you did not "defend" MR. Rocky.

Soon to be Umno member;

Obviously your standard of English leave much to be desired. UMNO in my context was used as a noun and is refer to a member of UMNO.
Anyway who cares how you think. You have a stagnant mind and still believes that all malays are for UMNO. Wake up kid, you ahve'nt see it all!

If we have so many corrupted politicians, how long can Malaysia last before the bank run dry.

I hate to get involved in Malaysian politic, but I just can't help it. My fingers must do the walking this time. I am pissed with the past and present leadership of UMNO, period. They brought this country in the toilet. Big time! UMNO politicians are just a bunch of corrupted goons to the core. Just look at what they drive around your neighborhood. I wish you guys can google their houses and post them on the net..list them one by one with their addresses too for the public to see. If a minister earns his salary alone, no way jose he or she can afford that kind of home and fancy cars. Do you need to be a rocket scientist to guess that?..duuuuh! Very sad indeed. Folks in kampong are getting poorer, but these idiots live like princes and princesses. They are broad daylight thieves, plain and simple! No other way to explain their greed.