Out of the blue, a potshot from Anwar

Update 6.30pm (with thanks to bro Azhar and Ayor Lemuju)

Original Post
We are all in awe of Erdogan. Last night, we talked about how the Turkish PM walked out of a Davos panel forum after slamming Shimon Peres, who was seated beside him. It was just awesome. Watch the video and read the story here.

Anwar Ibrahim, however, takes a step further and attempts an Erdogan on his ex-boss, Dr Mahathir, here.

[For Bangsa Malaysia who do not understand Bahasa Malaysia, the former Umno deputy president salutes Erdogan for slugging it out di tengah gelanggang or in the middle of the ring and derides our own leaders who do it from the comfort of their own home ground. He takes a swipe at Dr M for "paying millions to a Jewish lobbyist for a chance to kneel in front of George Bush".]
(Rocky's note: Actually, Anwar said "there's even a leader who'd pay millions ...", which I take to be in apparent reference to Dr M).

Dr M has just returned from a conference in Riyadh. But as WSJ reported, the few time zones away from Davos (but closer to the real gelanggang, which is Gaza, actually) did not stop Dr M from "delivering a sermon from afar". A source from Riyadh told me the leading English daily there did an interview with Dr M where he blasted Israeli terror. I'm trying to get a copy of that newspaper.

We can expect some zingers from the elder statesman in response to his former blue-eyes' potshot. 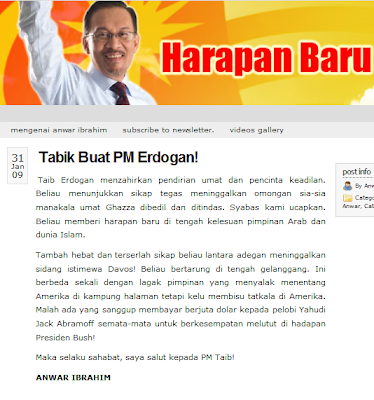