Daily reprimanded for too much Anwar? 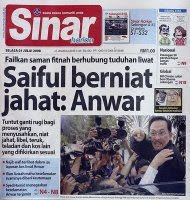 "No fair". I was told that an officer of the Home Ministry has given a verbal reminder (read: warning) to Sinar Harian, probably the fastest-growing Malay daily of the last two years, to be fairer with its political coverage.

Specifically, I was told, the editors of Sinar were told to go slow on the coverage given to Pakatan Rakyat. Opposition leader Anwar Ibrahim, especially, has appeared too often on Sinar's front page, or so it seems.

I haven't been able to verify this info but Jelapang did a posting Sinar Harian diberi amaran? two days ago.

The man behind Karangkraf/Sinar Harian, Hj Husamudin is a self made multi-millionaire. No political backing or hand-outs...truly a very rare breed....His publications should remain free from any kind of leash. Print whatever is news worthy.

Note: I cant stand Anwar, neither do I agree with the holier than thou minitry either!!!

WE ARE HEADING TO AN OPEN SOCIETY SO YOU CAN BE FAIR BUT CANNOT BE SQUARE.

Sinar is freaking awesome. Pakcik-Pakcik are buying them as if they're toilet paper (I mean it in a good way and literally as a paper you read in the toilet) thinking of buying it one of these days.

Pretty balanced and a current hit in my area. Should be an interesting paper to read in my morning toilet session.

Should buy one, to practice your BM at least (I mean it to everyone)

Sinar Harian has what its takes to be truly independent and not being subservient to any political master.

In this day,age and era of media independence, its pertinent that the credibility of news reporting is upheld,without fear or favour.

Kudos to them as being (positioned) the number one community driven Malay circulation.

You've made a post about a daily being warned for too much reporting on Anwar... who is head of Pakatan Rakyat, should some people not be aware of.

So what should Rocky be accused of for this?... Seems to be sympathetic to PR. I know!...let's call Rocky...FLIP-FLOP!

Okay, that should do it for today with this Rocky Bru...

What type of government..keep controlling newspapers freedom of rights and publications?
Why is UMNO so afraid of publicities given to oppositions?
Yet...they keep promoting one sided news in papers that are owned by them.
What type of so call "guided democracy" UMNO is talking about?
It has always been brain washing methods...and now they fear...minds to be free and easy....to think for themselves.
How cruel can a government be...under the disguise...how good they are....to his own very race.
Is this the way..they plan to rule forever?

i'm not even close to like Anwar.i dont like that fella.but that doesnt mean Sinar Harian can be prohibited to cover any story about everyone that they want.dont take back the freedom press.

Anonymous said...
This comment has been removed by a blog administrator.
3:52 pm

The same ministry should then reprimand all the mainstream media, esp TV3, for having too much Pak Lah, Najib, and in the sports pages Ronaldo, Theo Walcott, Arsene Waenger, Nicole David, etc etc.

Journalism today is about writing what sells best - sex, political controversy, sports. And waht is wrong with that as long as you don't incire the races or condemn religion?

So be it, lah. Anwar also needs some media coverage but cannot get it through other mainstream media.

He has a lot to say and promise but none of the papers want to print them because most of the promises made are not honoured.

There is a simple adage of Say, Do, Deliver. And it must be in that order. Unless Anwar could do these three tasks, he can forget getting publicity in the mainstream media.

On another note, I now notice that Tun Mahathir is getting more coverage in the mainstream media. Wonder why, when there seem to have been a blackout before on par with Anwar.

Back to the Sinar, it doesn't matter much because the readership is mainly the rural Malays.

I say be fair in reporting. Whether it is PKR or BN news, it don't matter.

Come to think of it, Anwar lives in a PR elected residential area which is rat infested, filthy, crime prone and congested by badly planned development.

What is the elected PR MP doing to improve living standards there? His boss lives in a filthy neighbourhood and all the MP does is waste time at some stupid vigils, courthouse crowding, demonstrations etc.

Hey do your job as wakil rakyat well and perhaps you might be featured in the mainstream media much more than Karam Singh Waliah!

I can never be more Malaysian.

I listen to Jamal A, UKAYS Bergemaaa, and I read utusan and, berita harian and Sinar.

Was Sinar Targeting the non malays to read them ?

They target Malaysian and Malaysian are so fed up reading FalseSTAR, NEW Crooked times,Malay Male.

Too much anwar ke, too much independence/newsworthiness?

to sinar harian: you all je the only akhbar melayu yg i baca sekarang...don't bow down to pressure from the authorities!!! Print what you feel is newsworthy!!!

Don't like Anwar but hey, when the press feel it is worthy of writing about him, let it be. Come on. Why should we only read about Pak Lah and his government.It is better if the paper write about the people than writing about politicians and stuff. There are government owned media and political parties' newspaper. So be it. What wee really need now is people's media which focus on the people, their livelihood, their aspiration, their sufferings and happiness, and so.

what to do, BN can own all the newspapers in town with their biased news all along...

when Sinar just balances up the BN-biased news all over town, Home Ministry shouts - no fair?

well, at least sinar harian gives an alternate view. Rather than toe the line.

Maybe other media orgs should take note of the guys over at sinar.

Maybe they have, and that is why Sinar Harian is being censured.

kalau tidak karangkraf tak la as successful as it is now, they know what people want to read

as for the home ministry butting in.. well they are doing what they know best but does anyone here think this will help them achieve their goal?

or could it be another own goal?

What type of government..keep controlling newspapers freedom of rights and publications?
Why is UMNO so afraid of publicities given to oppositions?
Yet...they keep promoting one sided news in papers that are owned by them.
What type of so call "guided democracy" UMNO is talking about?
It has always been brain washing methods...and now they fear...minds to be free and easy....to think for themselves.
How cruel can a government be...under the disguise...how good they are....to his own very race.
Is this the way..they plan to rule forever?

Pity u lah.
U talk nonsense all the times.

@Proud Malaysian 6:33 PM
Your statements here; they are so rarely heard nowadays. Many might just view them cynically but I'm touched and encouraged.

Makes me want to dream of genuine peace and prosperity for all instead of the hypocrisy of closet racists imploring "Bangsa Malaysia", but with knives behind their backs...

I am no Anwar fan either. But if i were the owner of Sinar Harian, I'll expose the person who called to warn me on what I can and can't feature on the front pahe of my paper. To hell with it, I'll put him on the front page as well and ask him to fly kites and fish spiders, know what I mean?

i think during the reformasi period, the sun faced the same problem for giving too much focus on the opposition. the letters became commonplace. nice to see how some things haven't changed.

Bottom line is profit . Sinar is just a typical easy to read tabloid that are sold to generate money . Anwar is the story of the day so logically selling anwar increase the papers circulation.

Wrong info?what the fuss, apologize like Malaysiakini did.You can get away by being not stubborn to bow.

I do not understand the big hu ha over this.

Anyway all politician are crooked no matter in any party. If you hve this planted in your mind , you will never get worked up by idolizing them.

itu ibrahim nor banyak berani one, i tell you....

we can do with more ibrahims and husams....