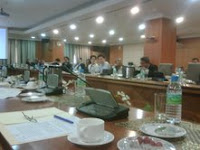 "Pls leave out blogs, Net". At the meeting called by the Home Ministry to discuss the latest proposal to set up a Malaysian Media Council or MMM (short for the proposed name in Malay, which is Majlis Media Malaysia), I took the following positions:

1. To oppose the formation of the Media Council
I told the meeting that I was of the view that blogs and on-line portals SHOULD NOT be included in the proposal to set up the Media Council. I said it was very ambitious on the parts of the sponsors of the idea to think that a single council would be able to deal with old and new media. (Bob Teoh of Sin Chew had made this same point before I did but he did not oppose the setting up of a media council).

2. To back the setting up of a Press Council
Since efforts to set up a Press Council had been initiated all the way back in 1973, I suggested that the meeting yesterday focused on the formation of a Press Council instead. I said as Adviser to the National Press Club, I'd be keen to take part in any effort to push for such a Council which, I believe, is greatly relevant.

3. To ensure that Press Council is Independent
I took the view that the Press Council must be independent and supported Zainon Ahmad's (theSun) insistence that the editors should have been the ones to initiate the effort, not the Home Ministry. To ensure the independence of the Press Council, the party that initiates the idea/effort must also be seen as independent. In this case, the initiative came from the Malaysian Press Institute which, I remember saying, had always been regarded as independent until it started agreeing to receive a direct grant from the Government when Zainudin Maidin was the Information Minister.

4. Don't use Press Council as a bargaining chip
After nearly four decades, the idea of a Press Council has remained an idea. Part of the problem is journalists' demand that the Government repeal all legislation before the Council is set up and starts operations.
I said the proposed Council should not be used for horse trading. We cam set up a Press Council and, at the same time, put pressure on the Government to repeal said Press laws. 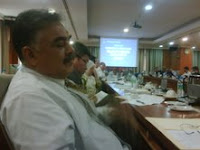 Norela Daud, president of the National Union of Journalists, said instead of a Press Council, the industry should consider forming a Press Complaints Bureau. The Star editor-in-chief Wong Chun Wai disagreed. He said there would be a long queue of people who'd have something to complain about the papers and some of them may not even be genuine complaints.

Serious reaction to a nonsensical action. I would expect nothing less from these leaders.

Good good good!!
All disagree means all is well with democracy in the making.
Political bloggers have much to be desired. They are clearly advertising themselves..to be sponsored...to learn a living that way.
Newspapers Editors...have their bosses.
Star is still under MCA..but New Straits Times is daily trying not to be pro UMNO........since sold off...two years ago.
They have big problems in trying to get right staffs.
They have very bad reputation..and that's hard to erase.
To be a political blogger and be non partisan..that blog owner..must be like Patrick Teoh ...whose freedom fighting is a legend to old guys ...like me. I think Attan know it too well.
To form an 'All Blog" non partisan...is actually saying..to be NGOs..{Non Government Organization}.. in blogging.
Do you have that.....NO!!
So..it is good...all political bloggers do not agree.

Sorry I have to delete your other comment on my blogger friend. Too personal lah. I hope u understand.

hmm... The blogs SHOULD remain free...period!

can always counto on you to speak up and be heard!

There's no way blogs can be controlled or monitored. It's like asking to institute censorship on the internet.

However, I feel that online portals set up for profit should be within the scope.

Good that you did not agree to some of the points raised including Press Complaints Bureau.

It will become a joke when knowing alaysians, they will complain over misspelt names or even font size or some badly shot pictures.

Kudos to all who opposed the Council's formation.

Don't surrender the only outlet for some semblance in freedom of speech left to us.

Your stand of trying to eliminate government influence is lauded. But at the breath swift action by journalist to form an Independent Press Council is imminent. Otherwise the media fraternity will be seen as merely making up excuses.

Same goes to blogs and on-line portals. If you feel that the new media need a different platform, then do it right away.

While we tend to always accuse the government of wanting to control, we then should ourselves lead the way on showing how things should be correctly done.

Ok, all disagreed to the formation of a Media Council. Most important, what should be the viable alternative? Bro Rocky has suggested the establishment of a Press Council which was initiated way back in 1973. I wonder whether this is going to happen in the first place. If the intiative starting in 1973 has none to show after 30 years, what compelling reasons to convince me that this is going to happen soon. The walk the talk never materialises when come to the formation of a Press Council. If there is no political will for self regulation among the press community, don't whine when someone else take charge.

"Don't use Press Council as a bargaining chip
After nearly four decades, the idea of a Press Council has remained an idea. Part of the problem is journalists' demand that the Government repeal all legislation before the Council is set up and starts operations.
I said the proposed Council should not be used for horse trading. We cam set up a Press Council and, at the same time, put pressure on the Government to repeal said Press laws."

Well done Rocky and whoever else spoke about this. The government cannot use Mahathir-styled old tricks to ocntrol the media.

Enough is enough and the government must realise this.

Kudos to you guys.

Glad you come to senses, ron!

Bro, it's good of you to attend and gave your views. If, as reported, the idea of a council was first first mooted in 1973, then a couple more years (if need be) to carefully arfgue the proposal shouldn't be a problem. I believe it should be a concul run by the people in the industry. The govt need not be in it. The media have too much laws over its head. Cukuplah...

hello fren..no need blogs la. all talk co@k only la...u oso nothing to worry what since got nice comfy job waiting for u in nstp wat....so why bother la bugger...opps blogger.

What the hell are u saying monsterball? Ur incoherent.

The Media Council has long been seen as another layer of subjugation for the already repressed media folks in this country.

A regulatory effort by the govt, it smacks of big-brother manoeuvres.

The press council idea is alright assuming that it is the peers that will regulate the industry.

However, do remember that almost all the media in Malaysia are either directly or indirectly owned by political parties under the BN and PR umbrella.

In the light of this situation, how can we be sure that an unfriendly government will not attempt to further meddle and shape decisions in the Press Council via these editors.

How many can hope to stick to a stand that is contrary to the government, when the very newspaper they represent belongs either BN or PR?

How many of our editors can take the BBC bosses' stance of neutrality and fight any attempts to meddle with media freedom?

This one soal periuk nasi. One that will make them capitulate. I'm sure you will agree, Datuk Ahmad Talib, Datuk Wong Chun Wai dll.

So this Press Council business is also kinda dodgy.

That's a different kettle of fish. Blogs are personal by nature. Some become popular because of content, but any blog owner can write any which way he pleases.

If he defames or slanders, there are legal recourse for the victim. Same way it happens in the media.

This additional policing, as we all know Rocky, is to just gag and control an important tool of public-opinion shaping.

A blog is interactive, so we get response from people whenever they read. Some bouquets, some brickbats but plenty of space for people to say what they think.

The public doesn't agree with u, it just avoids your blog. You are familiar with that eh Rocky?

Firstly, you imply monitoring and controlling blogs is an impossibility. That's stating an obvious point.

Then you say portals set up for profit should be within the scope. That is, it should be controlled.
You advocate control?

How do you define portals set up for profit btw?

What about portals that started free and was later monetised. And what is the rationale for u saying that portals making money should be governed while the no-profit one should not?

How do you determine what is a portal for profit? Do you know that there are free-hosted blogs whose writers are paid to write a certain way?

This happens even in the mainstream media where journos have been known to take money/gifts in return for a favourable write-up.

The Press Complaints Bureau thing is redundant because if the issue is serious enough, a disgruntled party can always take legal action.

As has been seen in the case of Malaysia Today, the government can just block access to the site, without citing an actionable reason.

But it is always easier to use strict-liability laws and laws that give discretionary power to a ruling politician, than to take the matter to court and trust the legal system.

Especially when the authorities' intentions are less than pristine.

As a member, Rocks, the "leave us out of the net" stance is ok by me.
Though I wonder, in the case of peer to peer sanction (let's say bloggers part of the press council), who the hell would they enforce it?

Technology has progressed by leaps and bounds, but mindset of those in authority still dwells in Paleolithic age.

So you think you are logical..sensible ..and I am not...galadriel?
OK la..you want to talk...talk la. Attan knows me better than anyone here.

On our part, we fully support the position you took on the issue of the Malaysian Media Council.

The Press Council should be the way forward