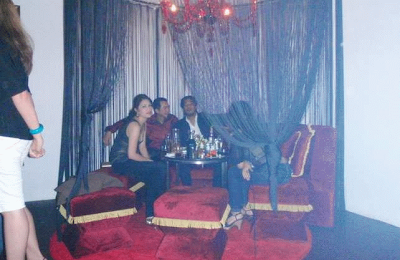 Bru Notes: The authenticity of this pic is questionable. In other words, this photograph could be doctored. Click here for the source of the picture. See also Doctored Pictures and Doctored Manifestoes.

Where was KJ? For a while, Khairy Jamaluddin was lying low. But now that he has qualified to contest for the Umno Youth's top post, which many thought not too long ago was his for the asking, the son-in-law is back to his old self.

And so, blogosphere reciprocates accordingly.

Sakmongkol AK47 has a blistering piece The Man called KJ, which answers his own question: What is it with KJ that people find so despicable? "Maybe, he is perhaps what Malaysia needs?".

Nope, says A Voice. In his latest posting here on Another Brick on the Wall, the anonymous blogger asks KJ to explain his close ties with one Tom Daniel and another Mike Thomson. The blog provides several other links to bloggers who obviously do not think that the SIL should be one of the people who would be leading Umno once Abdullah Ahmad Badawi steps down.

The fact remains, however, that KJ has got enough nominations to contest for the Umno Youth chief post. Not the MOST number of nominations, but enough.