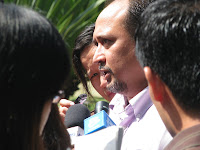 disappointed with the decision to prolong his bail by another month, to Nov 21.

"It's unnecessary for them to extend my bail. My posting is there on the blog, why take so long to close their investigation? I see this as an attempt to put a psychological barrier on me. I think that's the instruction given to the cops. They are just doing their job. It's politically motivated. Because the PM called me evil on Aug 20, the cops had to investigate my posting," he told a journalist on the phone.

Nuraina and I were there to lend our support this morning, the same place Jeff Ooi was taken and later RPK. Close to two dozens journos were there to talk to Sheih.