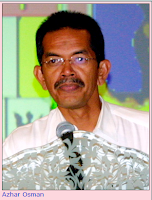 Alfatihah. Azhar and I graduated from a "boot camp" organised by the NSTP at Seri Pena in Port Dickson in 1993. We didn't pass with flying colors but we graduated, nonetheless. And we had fun. He was with TV3 then.
We last spoke sometime after the March 8th general election. I asked him if the Prime Minister's Department would like to keep bloggers in the loop about stuff like press statements by the PM, etc. He laughed when I said we were now in a blogger-friendly country. He said he would be happy to assist.
I was told later the cancer just won't go away, that Azhar was constantly fighting it.

I was on the road back from Terengganu yesterday when I heard of his passing on the radio. He was 48.

Art is a gud fren,.. He was my former classmate in SAHC.. Al Fatihah..

Al-fatihah to Allahyarham Azhar.
Arwah and myself didn't know each other that close, but that didn't stop him from acknowledging me whenever we bumped into each other. We would make small talks over a ciggie or two.
Personally I found him the most easygoing and approachable 4th floor staff.

Anonymous said...
This comment has been removed by a blog administrator.
3:25 pm

May his soul rest in peace.

Hi Rocky,
Alfatihah to Azhar. Takziah to his family. Azhar and I were quite close during our reporting days years back. I like his wit. He is also intelligent and knowledgeable.Also his accent.If am not mistaken he's British trained.When I last met him, I asked him why you work for Dollah. He just smiled

The father was my late father best friend. My father used to call his father "Pak Man Tompel", He also looks like Tompel

He was put in charge of my tv presentation class during the days of Jalan Liku.

He may not have known but had a hand in my career direction. Was honest in his dealings with me.

May God Bless your soul, my friend.

I worked in the same outfit as Azhar for a while though we didn't say much to each other I never did any work directly with him. Condolences to his family. Al-fatihah.

He did asked me to quit smoking! Good guy will miss him.

His name is same as me, exactly.. We never been really have known each other but there was one time we bump into each other at surau after the Asar Prayer..

I just don't recognize him, because he looks different from the photos of him that i've seen. But, suprisingly, he said to me "Azhar kan? Nama kita sama.." and so on, as our father's name also the same! Coincidently, we are both from Kedah...

Just look at that, who am I and who is he, and yet, he still recognized me as I don't really know him although we are on the same building (different floor). I think, he is really a nice person...

And this was around two months ago.. and today God had called him back to where he came... Al-Fatihah, may Allah put him in the place of the Solihin....

I am sure he was a nice man.Al Fatihah to his soul. My God Bless his soul. Politic or politic . Opossition or government, we are all the same. We are here with a mission.When the God said time's up,we have tomove to a different world.http://www.ezineartikel.com

After almost 3 years of him passing away, today was the first time reading all the comments posted about him. Thank you very much for remembering him. It means the world to me. Mr Rocky, thank you for post on your blog. May Allah SWT bless all you for all the Al Fatihah for my late father.

Dear Atia,
I am happy you found this posting.
Alfatihah.