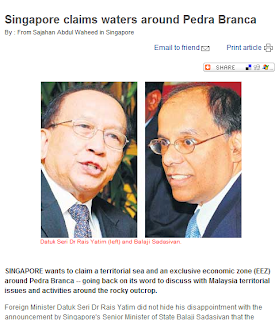 Singapore's 212-mile claim. Notwithstanding what Rais Yatim or what our A-G might add, Singapore will definitely claim a 12-mile territorial sea and 200-mile exclusive economic zone (EEZ) around Batu Putih, which became the republic's territory due to our a major screw-up on our part last May.

Which means we'll have to sit down with the Singaporeans and negotiate with them.
Which also means that we'll definitely be giving away a few more concessions to the Singaporeans before the end of the day.

This lecturer says it's unlawful for Singapore to want to make such a claim. That's the kind of ignorance that caused us to lose Batu Putih in the first place, if you ask me. We signed the International Convention of the Law at Sea, dear Professor, please take the trouble to read up what that means.