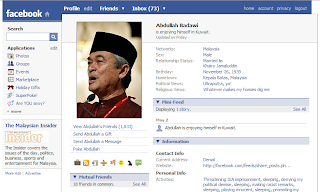 I received an invite to be a friend of an "Abdullah Badawi" on Facebook this morning. I had to check it out.
But as I'd suspected, it's a con job. This "Badawi" says he's married to "Khariy Jamaluddin" and lists his address as "Denial". See for yourself, here.
Someone is having great fun but at the expanse of the PM. And not everyone is amused. Someone has even cast a "death spell in 7 days" to whoever is responsible for creating the Badawi account on Facebook.
Anyone knows how to notify Facebook?

Later, I Googled and found the Facebook account of the real (I think) Abdullah Ahmad Badawi, here. 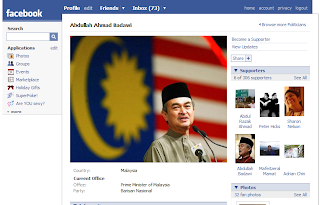 as much as many whom disagrees with what the PM has acted upon and has not; this is plain CHILDISH.

No comment; if I am the PM; just ignore it.

I have sent in a report which is below the page saying that this is not the real person and its simply insulting the PM of Malaysia.What ever said about him, he is still the PM and the head of the govt and we should not allow such insult.

You too should submit a report which is below the page.Make sure you choose "attacks individual or group"

Hopefully they remove this one.

I don't think Badawi deserves this.

This is downright a punch below the belt.

it just shows the fact that you cannot believe in everything you read on the internet.

Lately it seems more Umno leaders are urging Bodohwi to quit soon. I had a good laugh reading such reports. All these dimwitted Umno warlords clamouring for Abdullah Ahamd Badawi's resignation seem to believe the present PM bears all the blame for Umno's near-total defeat in the recent elections. As if he is the only one responsible for the debacle. A convenient scapegoat. They simply prefer to pick a bogeyman in him and close their eyes to their own myopic shortcomings. They all suffered the typical denial syndrome.

The truth is that a vast majority of Malaysians across the racial/cultural divide voted against the dead-end feudal mindset in which these wretched Umno goons are entrapped. To them, replacing Abdullah with someone "more aggressive and ferocious" (read ‘more fearful and intimidating’) and prepared to re-entrench Umno's dominance by every means available, including authoritarian rule, will salvage the wreckage of Umno's pride. This is where the looming threat of the Mongol Slayer enters the picture - with keris help up high.

They forget that the original Umno effectively died in February 1988 during the battle of two Umno bigwigs - Mahathir and Ku Li - and that the current Umno (Baru) was a hastily slapped- together sham of a political party that has no agenda, ideology or vision apart from serving to enrich its leaders at the public’s expense. The Vision 2020 nonsense is part of the gameplan for total annihilation of the country's resources.

These parochial minds only understand a world that's already passing - a neo-feudal paradigm in which the elite feed parasitically off docile and ignorant serfs (making slaves of the ordinary rakyat)and self-applaud their every empty-headed utterance.

Too late for them, the advent of the Internet bring new hope to the masses.

In cyberspace, the centre is nowhere and everywhere and helps to change our behaviours and perceptions. Change is what we yearn and it becomes inevitable as time goes by. The subjugation of Umno/BN was the coup de grace we looked for on March 8, 2008.

When Rehman Rashid of the NST ranted against the rising tide of uncouth and ‘unqualified’ bloggers - whom he despised for their ability to reach a worldwide readership despite shortcomings like a semi-literate command of English or outright naivete, gaucheness and even immaturity - he was really lamenting the transition from traditional hierarchies to an embryonic egalitarianism.

In any case, such myopic rants and raves of the MSM - apart from their entertainment value as slapstick political comedy - can only strengthen the Pakatan Rakyat (government-in-waiting) by making their vision of a non-race based and democratised management style all the more appealing.

So let's have more of it, please. Viva la Malaisie. Down with the wretched Umno neo-fascists.

Does he have the Superpoke application installed?

I ain't clicking either one man.
Just the thought is making me puke. I've had enough.Trying very hard to erase the incapable from my God-given memory but he keeps popping up on TV and everywhere.
Even having Noraini Ahmad by his side yesterday at the Hari Pekerja function in Bukit Jalil did not help. In fact sweet Noraini wasn't that sweet because of the aura of the one standing next to her.
Time for a new PM man....Don't waste our time. And money of course!

Rocky, the way I view this is from a different perspective. The way I see it is that someone is trying to politicize this hu-ha about Facebook and Anonymous handles, trying to accuse the internet community that the internet is BAD, and some stricter regulations should be done (within Malaysia that is) to ensure that such act of impersonating the PM should be regulated within Malaysia.

Count me wrong but I'm just trying to make a bit of point to what I think could possibly happen.

If I were you, I would long take it as a childish act.

I found this phrase on that so called paklah facebook.

Although I did not vote for Badawi's BN, this facebook thingy is tasteless la.

Whoever created it got a mind of a 3 year old.

How interesting to discover that somebody named 'Every Dog Has His Day' has plagiarised and edited a comment I sent to Malaysiakini before publishing it on my own blog!
Oh well, I guess I ought to feel flattered... :-)

Eh he's not my Facebook List you know, So is Lim Kit Siang.. Oiyooo I got connections man..

I should have quoted you as I am wont to do so of interesting comments/research by othersthat I find interesting over the web that I extracted to share with other readers.

I share your views/opinions and very much believe we are of the same brainwave. Once again, sorry for leaving out any reference of the good work done by your goodself. Of course, I am as much appreciative as you are flattered.

But Bodohwi is not the least amused these days, especially when the dogs are let loose barking incessantly to snatch at his rice bowl.

Yeah all you blogger above keep on kipas pak lah backside.

this 'badawi' had been on facebook for a long time. 2 days ago i had also blog on it.

yeah, that was, i think, a hoax. he would disclose himself BADLY in his own page?

Whatever happened to "freedom of expressions"? This shows that freedom has its limit....

Political games. Maybe that person was paid to purposely open that facebook account. People would do anything to gain political mileage nowadays. So the things you see and read on the internet. Think that person could be PAID to do damage.

Keep that in mind when you read stuff online. Especially so concerning our Prime Minister and UMNO.

Who ever created the fake profile is totally uncivilized and coward. They should learn from someone like Jeff ooi or Anil Netto when comes to express their opinions and feelings as a rakyat.

this is totally uncalled for - wht sick humor is this?! to think that whoever created this thinks its FUNNY! he/she deserves a spit in the face!

childish and not impress at all