For Spore, civil disobedience is necessary ... 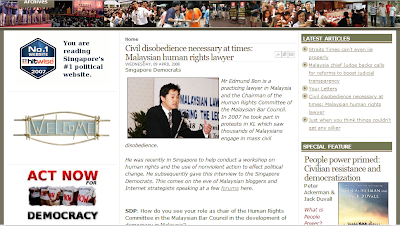 Teaching Singaporeans how to (and why they should) conduct peaceful demonstrations. On the day Jeff Ooi, Haris Ibrahim, Nat Tan, Steven Gan and I spoke at the iPS, "Singapore's #1 Political Website" featured an interview with my lawyer Edmund Bon (NSTP & 4 vs Rocky).
Bon was in Singapore to help conduct a workshop on human rights and the use of non-violent action to effect political change.

Excerpts:
"But if the Government does not listen then the next level may be invoked. Malaysians were unhappy that all the promises the Government made were not being fulfilled. And doors were being shut. Our institutions were being demolished systematically though not physically. There was therefore no choice but to demonstrate."

Meanwhile, our Roundtable session at the NUS was off-the-record. Our host from the iPS agreed, however, to let us blog on what we said in our respective presentations.
I was the third speaker, after Steven and Haris. Given my background as a journalist, I gave my views on how journalists who turned to blogging (A. Kadir Jasin, Ahmad A. Talib, Ruhanie Ahmad, Nuraina A. Samad, Marina Mahathir, and Maria A. Samad, to name a few) changed the cyberscape and helped make blogosphere even more potent.
These include journalists who are blogging anonymously, including Hard-T, Pasquale and Sime Darby Watch.
Of course, I did not reveal to the iPS forum the identity of these Anon journo-bloggers. That's for me to know and for them to find out.

Anywayz, you must have met some RDC bloggers and had a chat with them, no.

Could you at least tell us how they 'think'?

For perspective, Neil contributed this item at Screenshots several weeks back -

in which an RDC blogger surmised that there is one fundamental difference between us and them.

To them, we have a 'win-lose' attitude when dealing with our government.

The same blogger thus wrote "One ends up with quiet evolution, the other is on the way to revolution".

Of course, that posting was made in August '07 therefore a lot has changed in the meantime, including AAB's open admission that his administration have totally miscalculated voter sentiments which were influenced by the alternative media, ironically, resulting from the banal MSM propaganda.

In light of what happened on GE12, will RDC bloggers redefined their modus operandi? Or are they 'still afraid'?

More importantly, should Malaysian bloggers now look for the next tipping point? (wink-wink).

hahahaha... civil disobedience is necessary for singapore? you must be having a laugh. as if the singaporean government are SOOOO tolerant of dissent. mind you, i'm sure our neighbours across the crossway are much happier with their standard of living compared to us, it seems the singaporeans can do no wrong.

but don't flatter yourselves by saying the government welcomes disobedience. who are you trying to convince? don't get me wrong, i have the utmost respect for the singaporean government, i think they have done an absolutely fantastic job running their country, but perhaps people may enjoy a little bit more freedom in their lives, a little bit less pressure to perform, and a less aseptic environment to live in.

i think it's cool of malaysia to have a demonstration once in a while. it shows that we have feelings, that we are not androids who are programmed to just achieve achieve and achieve. in this sense, malaysia as a country is better than our more prosperous neighbour.

our food tastes better, even with smelly drains just a stone's throw away from the mamak shop, our lifestyle is more relaxed, our cultures are more colourful. it's okay to have imperfections, i would be bored out of my brains if i were to live my life in such a near, orderly, clean and behaved environment.

for sure i can only dream of a crime rate as singapore's, a GDP like singapore, a judiciary like singapore, a PM like singapore!, but... even after all its imperfections, i could never turn my back on malaysia. we are a people who are so colourful, a bit of beef once in a while is all right. differences in opinion and agreeing to disagree, are part of humanity! no country is perfect, that is what i have learnt as an international student in the UK.

Just had a conversation yesterday with one activist. I was raising an issue and they were going blah blah blah ... abt rights and abt this and that.

Had to inject and say that we shd economise our conversation to discuss thinsg we do not know. Just short of saying that what you said wud be suitable for lecturing to gawky eyed university freshman and sophomore ... American term for ist year and 2nd year. Something came off my mouth worthy of quotation ...

Don't get too theoretical, be real ...

Meaning not to be over theoretical with simplified conclusion, summarised assumption and over rate what are essentially academic hypothesis.

There was a lot of factor but one major factor that many non BN and Abdullah Badawi refuse to accept is that BN members, especially UMNO members gave protest vote by destroying their vote or gave to opposition.

So my activist friends ... Harris Ibrahim, Edmond ... and many of them ...who are in the midst of simplifying the recent poor showing of BN as the victory of the idealism

.... Get real and do not be theoretical

This way you will not make mistake and be bitching abt it later ...hmmmm haus lah lama tak ke NPC

For a country that's fine, fine, fine
Their own solutions they must find, find, find
Other that being famous for dine, dine, dine
They have to learn their people to bind, bind, bind

Dear Rocky, May I suggest that those unhappy Malaysians especially with those still not happy with the freedom of speech and human rights whatever in Malaysia migrate to Singapore.

We only need Grateful Malaysians. Not sour puss, grumpy and complaining lots who only talk and dont do any work or anything good for our beloved country.

If these lots leave, its ok, we have plenty of foreigners lining up waiting to be Malaysians anytime.

IF these forver unhappy lots, want a PERFECT everything country, trylah SINGAPORE. Open up blogs that critizised the Governement and the leaders, seelah what happen.

in the land where Father-Son-Wives" rules, "FAMLY RIGHTS" comes first then human rights.

I don't think the Singaporeans will do anything against their goverment since they have everything taken care of and have a big pile of cash to spend unless their properties and assests are taken away by the goverment like what is happening in malaysia where most chinese pay the huge chunk of tax but simply has a superficial representation in the goverment that ensued resentment.

Time will tell :) and Spore can certainly do with more mature and robust protest.

The problem is nobody wants to go to the protests that are organised. Prolly a combination of who is behind the civil disobedience, the public preference to stand on the sidelines and watch, and the frustration is relatively not that huge enough to make us break away from our lethargy.

Hi Rok,
If LKY and son are so perfect in managing Singapore, how come I came across so many disgruntled Singaporeans overseas especially in the U.S. They migrated. Anyway, opposition party PKR adviser brother Anwar was videotaped in a TV forum organised by Han Chiang High School.
Can you imagine a PAP critic or Francis T.S. Seow being interviewed at a Malay High School or a Chinese one in Singapore? Your balls will be removed by LKY and son and thrown into the Singapore river maaa.

I was also invited to be a speaker at the forum but I refused to go to Singapore and never will. The main reason is because LKY and son look great or are made to look great is because Singaporeans by and large are a bunch of "Pondans".

" Prolly a combination of who is behind the civil disobedience, the public preference to stand on the sidelines and watch, and the frustration is relatively not that huge enough to make us break away from our lethargy."

quite true. if walter woon is leading, perhaps more will carry the torch. however, if mr woon comes into the fray, he too will probably be character assassinated.smarter for him to remain apolitical( wonder why) and contribute from the side as the situation is still tolerable howbeit massaged for now.