"Saving Umno and the Malays"

Ku Li has Dr M's backing. Or so says Pasquale, who claims to have some inside info on a meeting between the two former political rivals just before Ku Li offered himself to challenge Abdullah Ahmad Badawi's presidency last night. Pasquale is convinced [here] that Najib will be "preserved" whatever the outcome of a clash between Ku Li and Pak Lah.
Most queer. Is it possible for the No 2 not to take sides here?

If you didn't catch Ku Li on tv last night (was it in the news, by the way?), check out Kickdefella's clips Pt 1, Pt 2 and Pt 3 of Ku Li's press conference.
And my piece in my paper today, below. 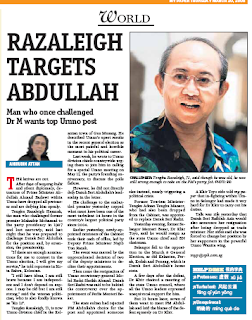