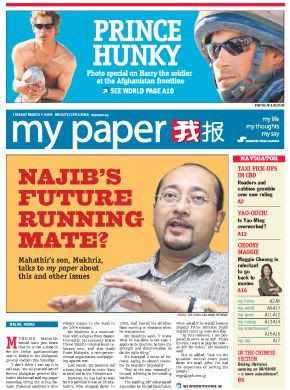 I will give my view again on this in a few years time.

The headlines give a negative impact to Mukhriz to get those "atas pagar" vote unless they read the whole interview.

Unfortunately not all those rural voters read English.

Dato' Mukhriz is a rare honest politician in BN. His interview reflects his personality - calm, rational, humble... I pray he wins the election, even though I pray ALL OTHER BN candidates lose...

I thought it has been arranged for Najib and his men to "lose" their seats this time? You know, Team A vs Team B sort of thing. Or maybe it is the other way around?

It's a loose talk by a journo/blogger like you that will kill Mukhriz's future hope. He's yet to win an election and to prove himself and you already anointed him Najib's running mate. Are you a double-agent for Khairy or what? If he believes you, he'll spend every dollar he has to kill Mukhriz and along the way Najib too. Now I don't blame people for calling a blogger like you a loose cannon and syok sendiri. Mukhriz has a long way to go before he's ready to think of such lofty post. You are trying to make him sounds like Khairy, ambitious and in a hurry. Please Bru, grow up. I see your flowing lock turning grey. Don't be a child. Show me some grey matter. Don't kill this good man in your hatred for KJ and his FIL. If voters elect KJ who are you to complain? If he does wrong, bring forth the proof and we shall all "slay" him. But don't cause Mukhriz's early demise because you ahbor Khairy and his FIL. Don't hide behind Mukhriz as you take potshots at FIL and SIL.

A good MP or not all BN MPs are the same - all vote as the master tells them, all subservient slaves of Umno big boys.

Sorry to detour a bit.

Please check out this site:

After looking at the numbers on the above site, if it's between BN and PAS, I'll even vote PAS... just to make my vote count!

not if KJ's got something to do wif it...

Kerismusddin is left in the dumpster??

Wah, start to talk who is the next PM?

If not Badawi and not Najib, who else in UMNO?

Why leader from MCA, Gerakan, MIC cannot be the PM?

Just try to think outside of the box.

Can Agong interfere and install the PM that the people want?

In view that the country is going to the polls on Saturday, Malaysiakini has decided to make its website free beginning today for the next seven days.

You went wrong when you brought this Najib joke. I can swear that Najib will never be Malaysia's PM. he fact that he is not targeted by both Malays and Chinese no is because he is a just a name. Our PM is KJ and Boodwi his assistant, otherwise, neither Malays nor Chinese are ready for Najib. Don't have the slightest doubt about this. Time will tell.


You better say him being a candidate for PM. That sounds better. Anyway, they (KJ/Bodohwi) will cut him into size beforehe dreams of anything future.


For that NOT to happen, we need to weaken KJ and Bodohwi. How? Deny BN 2/3 majority and make sure you don't vote for any UMNO or BN member. Then UMNO will revolt against the sleeping beauty. That way, we can save the nation. Otherwise, it is all a dream.

All the best to Mukhriz, you are ONE of the few BN candidates I hope would win an MP seat.

Erm.... how about some tougher questions for Mukhriz? Like will he speak out in parliament against corruption, bigotry, judge fixing etc?

How about selecting some juicier topics to write about? Like the mysterious 6,000 postal voters in Bukit Bintang, a place where there are no soldiers in sight. Or the sudden increase of 10,000 voters in Permatang Pauh. PJ Utara, in comparison only recorded a 1,000 increase in voters. Or about the media bias against opposition parties, misuses of government funds for election etc. No more stories about Mukhriz please.

Brudder ..... You're so blatant it's actually quite funny. And disgusting. You're so desperate to up that camp you would lower your journo standards and do one of the most boring interviews we've ever read. How pathetic is that?

Mydeenthinks that it's perfectly fine for Rocky support a particular candidate or politician. After all, he is a rakyat too and has the same rights we all do. So what if he uses his pulpit to push his ideas across, there's nothing wrong in that.

But clearly, the stand must then be stated so people do know that the views as expoused here and in MyPaper are subjective and may not be as objective as they would want from an impartial journalist.

Muhkriz, you're on the wrong party!

Apa yang speak up sangat pasal interview ni? It's so mild and boring.