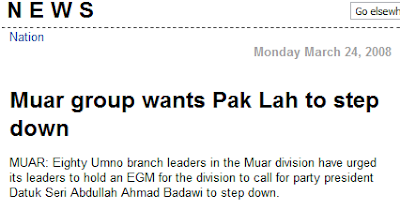 "Ku Li for President". 80 Umno branch leaders from the Muar division have asked Abdullah Ahmad Badawi to step down and have pledged their support for Tengku Razaleigh Hamzah to become the next party president. Read the Star's story here.
It's still a long way back to the top for Ku Li, who must have the backing of 57 divisions to qualify as a challenger to the top Umno post.

The brave ones from Bandar Maharani aren't alone. Outside of Umno, M. Kayveas and Syed Arabi spoke of the need for "honest re-evaluation" by the BN. Kayveas, the PPP chairman, who lost his Taiping parliamentary seat, blamed Pak Lah and Najib for the BN's poor showing.

Anonymous said...
This comment has been removed by a blog administrator.
9:07 pm

You should behave yourself in Parliament and stop calling other MPs 'monkey".

You are not in a zoo Parliament!

rocky, this akinol post is spam and could be virus, you need to turn on your word verification (to prevent auto spammers)to avoid this problem or it could infect your readers pc when we click the link

But as you know , all those BN people are still in denial - they cannot see themselves as evil but always blame on to others.

Reminds me of the company I was working in, the senior managers are never to blame when there is a negative event. Normally the junior managers or executive will get the blame and sack. But come success - you can see the senior managers clamouring for victory even though they are no part of it. Hint: VT's companies

Why not? Patrick Lim already can be new Sultan of Terengganu, that's why he want Idris Jusoh to be MB so project can continue using Terengganu Oil "wang ehsan" $$$, Abdullah also will support them as Prime & Finance minister!!!!!

I think the current situation warrants Pak Lah's leadership. Some of his selection(excluding mike tyson and Tengku Adnan)are commendable. Also this dream come true election result wouldn't have been possible if not for him. For that he deserves credit.
In the case of Ku Li, I don't think he would be able take over from Pak Lah. If anyone would have listened to Dr.M' answer at M'kini's TV, if he would back Ku Li, all he said that we must wait, there could be others who are also qualified. To me, the underlying message was, he was referring to Najib. Any sensible person will tell between Pak Lah and Najib, Pak Lah is so much better. I can't imagine we the public could be exploited by Dr.M and others for the purpose of promoting Najib.

Second, the first comment was made by a person who had nothing to do with the posting, but also may mislead the readers to a site which may threaten the security our computers.

I am from Muar myself and I'm 100% behind you guys in supporting the idea of a Dollah step-down. But the idea of supporting Kuli hmmm, am not too sure tuan-tuan. I find him passe but good to have as a senior advisor ( ala Lee Kuan who?). Maybe we UMNO Muarians should go to the general assembly and elect a new leader. I mean NEW! Bukan the deputy, nor them guys who are all too close to the previous leadership. In normal circumstances, if the leader goes, the followers should be axed too!

Please do not place the Blame to Pak Lah. 5 states gone is due to

1.Strategy by Najib. He want Pak Lah to vacate the place. Look at Najib face...there is no face of worry. Got it ?

2. Stategy by KJ. When my FIL kick the bucket or throw the good-morning towel, it shall be my next move?

3. Rosnah ~ the planner. She must have got her little dirty fingers involved in tthis tric.

trengganu is in great mess, perlis is falling apart, 5 states have gone to BA, kelantan is challenging you, corruptions are unfolding, people are cursing you, you cabinet is full of war pigs...wei, apa tangkal engkau sudah pakai la dolah.

Finally, we hear thunder in the horizon,I can see rainclouds rolling down the hills already and when it comes it will finally flush away Pak Lah and Kairy and their loyal supporter Najib and UMNO can finally be rejuvenated. UMNO Muar got balls, I am proud of you guys.

his days are numbered.

There are 3 groups of people that want Pak Lah to stay on:
1) His cabinet ministers
2) The Opposition Party (for obvious reason)
3) UMNO members who do not care about the country.

Pak Lah has been a "favorite Uncle" figure to many of us, but now must do the responsible and honorable thing by stepping aside, with whatever dignity he still have left.

I agree. Tengku Razaleigh is another racist in Umno.

why on earth can the PM/FM, ex-MB allowed to rob Terengganu Oil "wang ehsan" at the expense of rakyat? ALL THE CRONIES should just go to HELL including Patrick Lim!!! All these bustards will have their pay-back time whether on earth or in hell!

I can't understand in a crisis, y umno doesn't want to invoke its EGM mechanism?

Do they have other bigger, personal interests, LAH?.

Muar ( bandar Maharani ) was the same area and people which give Semangat 46 the only seat in Johor back in the 1990 GE.

That's the spirit of orang Muor inherited from Kiai Shamsudin and Salleh.

And Muor have produce many state and national level leaders way back before 1957 beside the famous mee bandung.

The rationality of Muor voters and people for the sake of the party and country have a long history.

Only hishamudin don't remember Dato Onn's history and Najib seems to forget that his grandfather
( Tan Sri Noah ) was from Muor.

Show to them what our balls are made of.

Ever since Lim Guan Eng became the CM of Penang, Goh Ban Kee of The Sun has been on his case. GBK is apparently unhappy that LGE has decided to waive the MPPP summonses issued before March 8, 2008. GBK claims that what LGE did is unlawful. Do you know that many of us were unjustly issued summonses by over zealous MPPP enforcement officers for parking at expired parking meters when the meters itself were faulty? These officers didn't even bother to check the parking meters to see if they were working in the first place!

The DAP-PKR Coalition is barely 2 weeks old and this dick head is already going after them. Do you know folks that Goh Ban Kee used to be a Penang Municipal Councillor? GBK like all the other ass kissers in the BN did nothing to stop UMNO from plundering the State when they were office bearers. My question to Goh MonKey is, what were your contributions to the State when you were the MPPP Councillor? What can you be remembered for?

Since the election results, Kayveas has been blaming everyone else except himself. He said that there is nothing wrong with him or his party. He obviously doesn't realise that he is very much hated. Ask ordinary people on the street, especially in Taiping. They loathe him and call him a liar and a cheat. He should learn from Koh Tsu Koon. Unfortunately, Kayveas doesn't have the wisdom, humility or intelligence to do so.

The Motto of orang Muor is :

Pak Lah can ask for advice from former Umno leaders in Muor who have been kick out for failing to follow these rules....

ha ha ha. whoever the current Muar Umno Division Chief and do not follow the tide, will definately be wipe out.

Hope other umno divisions and branches will follows....

Kayveas is an opportunistic donkey. He strikes at other BN component party when they are down trying to get ahead by stepping on their backs. Even as the other component members MIC / Gerakan / MCA put the blame on themselves for the poor showing, Kayveas, that thick faced idiot, put the blame on his badge. Can't imagine why PPP want to elect such a low life to represent them.

UNNO has to reconfigure the party's election system.We all know that
the current method is an 'open- palm 'sysem. Get in the club through whatever means usually thru the ringgit footprint and once in, chart their way to a 16- bathroom istana ,as an example.( Of course you can make much more. Only their conscience will let them to pare down their greed..sometimes
the conscience trigger isn't there..).

The general election makes everybody - the mats, the ah chongs and the samys literal ketua bahagians and they managed to kick out a few menteris and a few state governments.
After the election (In UMNNO ,Minus the samys and ah chongs ,) we are left with the clueless Mats who are being brainwahed and dazed by the mainstream media.The leadership is back in very familiar territory - that of internal control .
Control the Ketua Bahagians. Tell them you will not get this or that - they will
buckle. It is soo easy.


The party election system breeds self-serving mutants and unless there is enough critical mass to demand change - then it will be another for the wish
list.

There has to be a way out of this.At the moment those who benefitted from the system
will resist any attempt at change. The changes will have to be forced on them.The clueless rakyat has given them a warning through the election but the benefactors prefer the status quo and goes back to using the same stupid self-serving political logic.

Tengku Li has put forward a way out. Have an EGM. It is a start to create a critical mass which will tip the party to change. But like what the former PM said it won't be easy. If only UMNO members think out of the box there will be hope..
At the moment the pretender king and his courtiers are have recovered their swagger..and back to their old antics..

UMNO has to transform or this country will sink..