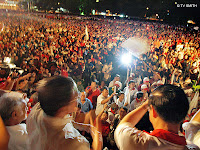 Blogger Jeff Ooi deserves to make it to Parliament. I didn't mind it when he was a Gerakan member and it's nothing to me that he's contesting the Jelutong seat in Penang on the DAP ticket. Just help get him there and he'll help make this a better Malaysia.
He'll be a pain in the neck for slobs masquerading as people's representatives. KJ might regret it if he makes it to the Dewan Rakyat.
pic courtesy of TV Smith, who reported that Jeff did a guitar solo in front of the 70,000 people.

solid rap on corruption in malaysia
check this out :

Jeff! just do it!

BN will shit and pee in their pants looking at the 70000 crowd drown the UMNO dogs!

Lets take the country back from UMNO-BN on 8/3!

why not? and he can slag and belittle malays, the racist that he is. look at his blog and the insinuation he makes never makes this person here fail to wonder whether he has always been a DAP sucker. God forbid such a chauvinistic pig to lord it over. But then again maybe he should win and sit in a chamber where he might realise that being very pleased with oneself and by trying so hard to make one's blog the premier of all blogs amounts to nothing in a world where if you look like pig, nobody's going to give credence to what you have to say.

woowww...look at the crowd, such huge turn out. you sure this is Jeff's do and not the PM's?

We (5 of us) were there. It was awesome. Never felt so great attending a ceramah like this for a long time. It was well organised and the crowd was orderly.
We'll be proud to tell our children that we were also there - a historical night indeed. Let's pray that God gives us all the courage and wisdom to cast our votes wisely this time.

On the eve of election, the sleeping PM continue to THREATEN us and DIVIDE us

You can imagine the next 5 years.

It is so CRITICAL that we need to put more MPs from DAP, PAS, Keadilan to stop this PM to continue threaten us and divide us.

He continues to divide us so that the elite UMNO can continue to RAPE, to CHEAT, to LIE , to SUPRESS, to HUMULIATE the country and Rakyat.

All the COMMONERS be it Malays, Chinese, Indians, Kadazan, Iban, Bidayuh, Melanau etc suffer as BN divide us.

UMNO elites uses NEP as a facade at the expenses of the Malay commoners and poor Malays, to enrich the elite UMNO.

Voters, you are the boss, you decide with wisdom.

Only YOU make can change.

check out the New York Times www.nytimes.com front page at this moment - cool news on "hazy prospects for malaysia premier"

Yes, the wind of change is blowing now.

Let us not lose our focus and momentum. We shall call upon all our friends and relatives to vote for the Oppositions for a better Malaysia. BN is becoming too arrogant and is not listening to rakyat, lets give BN a tight slap.

As we all know, BN is becoming very very desperate now. Let us especially those help up in the election monitoring and the vote counting/verifying be VERY VERY ALERT and VERY VERY VIGILANT, don't let anyone to have any excuse to go wrong. We should voice up, protest and report it if we found something wrong.

Don't let our guard down and vote for a better Malaysia.

Ya Jeff can sure be a good pain in the butt for those hp6 MPs! Go Jeff!

So said Mr Kalli!!! For a moment I thought he was kind enough to remind us to be on alert to character like himself ie. The Real Bad Bad Wolf.

Due to lack of opposition and the rampant abuse of public fund The Character like Mr Kalli survive un hindered.
The heat must be unbearable for this character of a wolf in the sheep clothing...thus he has to remind us about the red indian and the wolf....

To all pemerhati pos undi, please look-out for the groups of voters who seem to get preferential treatment from SPR officials to 'cut' queues during their registration. Scrutinise their KPs, take their photos and MMS to other pemerhati at nearby pos undi. If they are pengundi hantu, they will likely head to the next pos undi and cast another vote.

yep! jeff rocks indeed! he can sing... and good voice too!

i was there and i can see the crowd was so enthusiastic indeed... all the cheering, chanting, whistling, shouting of slogans and so on - HEBAT!

i really hope all these thousands who attended will vote DAP.

Sorry if I sound a bit parochial.

Jeff and I are budak Pendang. Jeff is much younger than me of course.

I went to the Pendang Malay School in the 1950's and Jeff went to Sekolah Menengah Pendang.

Tun Dr Mahathir started his Parliamentary career in Pendang in 1964.

I wish Jeff all the best.

Jeff Ooi has marked the difference in Malaysia history. He is a prominent blogger. He dares to speak out and even contest in his first general election. I am rather impress by him courage and strong attitude to change Malaysia.

He could make a difference. Why not letting him to win this race? It's only a matter of time before it gets there.
The government takes fully control the mainstream media. Major mainstream media are filled with flattering stories on the government and its achievements ahead of March 8 general elections.

But people like Jeff Ooi, used blogs to give everyone a voice. We no longer have to be afraid of government. Let’s speak up and reform for Malaysia.

The question is whether the huge turnout will translate into votes.