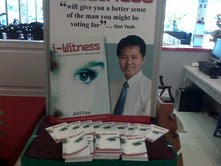 Malaysians from all walks of life have donated some RM65,000 to a fund raised 10 days ago to help send a blogger to Parliament.

Jeff Ooi, who has been running Screenshots for over 5 years, is contesting the Jelutong parliamentary seat in Penang on a DAP ticket.

"People who believe that bloggers are not relevant to real life and real people are .. dinosaurs," he told a press conference after launching his first book, i-Witness.

I am here with bloggers Zorro Unmasked (Bernard Khoo) and Tony Yew. We passed him some money raised last night by bloggers.

RM1 or RM65K it shows that blogger will never blog alone.

To those who said that bloggers are goblog or syok sendiri..eat your words. Win or loose is adat bertanding - mana ada draw dalam election.

Great that Jeff have collected that much so fast.
Hope that he wins in the GE.

Good for Jeff that we have all chipped in to make his bid into Parliament easier after all he is seeking a mandate from the people and be their agent for change. The choice is left to the voters to decide. And it crucial for Penangnites to ensure denying BN the two-thirds majority to ensure that the Election Commission will not be able to redraw the boundaries there to make it a “second Sabah”
The BN has unveiled its Manifesto and its was an attempt to fish back the non-Malay votes according to wired agencies report –“ to soothe growing anger by minority Chinese and Indians over education and religious rights.” They also “would keep Chinese and Indian schools, extend use of Mandarin and Tamil at national schools and offer university scholarships for poor students, irrespective of race”
All in all, it was directed at the declining support from the non-Malays. So another BN Election gimmick at Election time. Vote opposition to cut the 2/3 Majority. More details at
Go H E R E

“No, it doesn’t necessarily mean a price hike,” he said

Does the headline and the actual reply from the DPM mean the same thing? Go figure it out!

And the petrol/fuel(not oil) price will remain for how long? 2, 3 months or a year after the polls?

Get an unequivocal answer from BN!

Rocky - very happy that you came all the way to support Jeff. I have done mine too. Now -it's to spread the word through the grapevine.

Even if Jeff get $65 million, will he or the other opposition be able to buy a slot on TV or radio. It's clearly a one sided game. Like watching Schumacher racing without Alonso.

Anyhow the result does matter and all the best to you Jeff.

Rocky... I want to try to do of what jeff had done... requesting election donation on line... here for PAS in Perlis...
Tabung dana pilihanraya PAS Perlis
http://anakperelihblog.blogspot.com/2008/02/tabung-dana-pilihanraya-pas-perlis.html

If all the statistic was removed from BN Manifesto, Dollah would be speechless.

Consider this. Jeff and all other opposition politicians had to struggle to raise funds for the election campaign. 65k is hardly anything, if u think of the amount of travel, expenses that the opposition parties have.

and BN candidates? Firstly they probably "make" so much through corruptions and contracts, that they re pretty much betting their fortunes on winning the elections. A 30-second advertisement slots on Rtm itsel fprobably worth rm65k that jeff raised. and consider the t-shirt,banners, pamphlets, flags...

i think it's a joke to think that the ruling party candidates only spend rm100k per candidate.

btw, anyone ever think why the Election committee required Rm10k deposit to stand as candidate??? and how everyone raised their money for that?

Back in 2004, I would have voted Badawi, had I not been in the States at that time.

After all, he was The New Guy. And he promised transparency, crackdown on corruption, more freedom, and efficient governance.


Nowadays I get often asked if I'm voting for Badawi's BN.

My response is "Did he keep his promises?"

NTV7 sent English & Mandarin newsreaders to the book launch event, but their interviews on camera were not shown in tonight's news slot. Guess Jeff/Rocky got to raise $ to buy TV slot on media prima(umno) TV stations !

The idea of a blogger in the Dewan Rakyat is great. I hope he is elected so that we can have some real online insights into what goes on in Parliament.

Perhaps the language and decorum will now be more "parliamentary". Still, live TV coverage is better to show the rakyat how their MPs perform.

It would be nice if supporters of Jeff Ooi could also assist people like Charles Santiago who is standing under DAP for Klang...

Jeff campaign funds reached RM95K and he already start re-donate some to fellow candidates who need fund. Funding is only half of the story, if you can help, walk with them, spread the news..reach each and every voting rakyat especially in kampung who has no privilege of accessing alternative news like we do. Jeff and fellow candidates needs every support, however small, to convert vote to Barisan Rakyat on the 8th March!

Hey hey not bad... Not bad at all...
Hope he meet's the rakyat more instead of our BN candidate who keeps on missing in action.

While i applaud your efforts and that of other friends of Jeff, I can't but highlight the fact that Jeff is in for some reality check. It's a very noble effort by you and friends to come up with funds for the election. It's going to cost a lot of money to campaign and win an election. Nowadays, you need money for everything. More if you want to run for public office. While money alone will not ensure victory, it can be the single most important element in all this. Will Jeff pull through? It's everyone's guess. Even if he doesn't, the experience will be invaluable. I'd have preferred him to run on his own ticket ie an Independent. By going with the DAP, he has already lost some non-Chinese support. If he had gone with the Gerakan, he wouldn't have got a seat. If he had gone in as an Independent, he wouldn't be beholden to anyone except to himself and his supporters. Msian politics at this point in time functions along racial lines, and that's the reality of it. Whatever the outcome, Jeff is on a new learning curve. All the best Jeff!

Newswise, the newspapers should have picked up Jeff as a nice news item for the election. All the ingredients are there - new kid making his first attempt, blogger with a following, asking friends for donation to campaign. It should make interesting reading.

Maybe they don't want to give Jeff the publicity. Jeff as a candidate deserves proper coverage because his story has its fair of human interest element.

Jeff will have to start developing some good contacts with the media fraternity, whether he likes it ot not. Getting his news out on newsportals and blogs are fine, but there's a big audience in the established media too. Think about it. Jeff may have to swallow his pride in order to get his views across to as many voters as possible.

BRAVO!
i standby 'charlie' squad for you Jeff!

In the GE, the govt candidates will have all the money they need to spend on their voters but how about the oppositions candidates? They have to just rely on the mouth to get the votes. Do you see any big advertisement in paper like the BN? This is truly a one sided fight.

By the time the GE is over, he MAY be a millionaire with the rakyat`s money.
SO will those others who solicit donations or gets donation online/direct credit to accounts.
So easy to get rich. Even before becomming MP one takes rakyat money!

I don't blame you for being skeptical about politicians or politicians-to-be.

Because i assume you already know the supposedly sad state of corruption, cronyism, patronage, and ineffectivness of the present people in charge.

Having said that, i strongly believe, we need people like Jeff to convey the peoples mesage to the people in office, and information and resolutions from withiin parliament out into the public eye...whther they act or not, that is an entire thing. These are the checks and balances, we, the people will need to put in place.

Arguably, there is absolutely no incentive for Jeff to run for a seat. Its not like he needs extra attention or readers for his blog, and i believe time will reveal all.

Give the man some credit, he is doing a service to the country. Something what alot of us cannot and unable or even won't do.

Maybe I should go inform the guiness book of records? Coz malaysia has definently set the world record for oldest people alive!

wow ! today I see alot of shocking news ! 1.the blog donation to jeff
2.the SPR thing...