The man who will take on Khairy

Chegubard. Wherever KJ decides to contest in this General Election, the most unpopular son-in-law ever is going to face the same opponent. Meet Badrul Hisham Shaharin aka Chegubard, PKR's answer to Umno's young ambition, minus the chips. 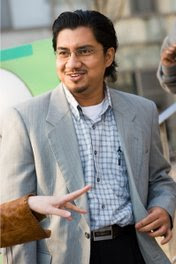 It will be an interesting clash. The backgrounds of the two young men could not be more different. The PKR supreme council member (elected) was a Che' gu (teacher) before politics. Khairy was a diplomat's son who grew up on a silver platter, studied in Oxford, married Nori and was made Umno Youth No 2 (not elected). Chegubard had a diploma from a teaching college in Seremban and went on to further his studies in South Korea.

Black has the story Blogger to take on PM son-in-law.
Yep, Chegubard blogs, here. KJ, on other hand, sees bloggers as a threat [but he probably paid someone to run a blog for/on him here].
p.s. Another major difference between the two:

When KJ takes part in a street demonstration, the Police protect him. 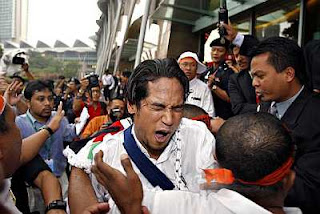 But when Che does, they do this to him. 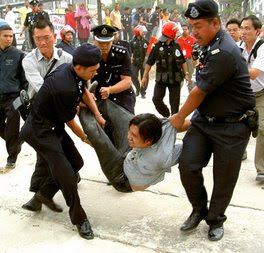 That's why they don't put a PAS candidate to contest against KJ.

Anyhow Chegu Bard, all the best.

Shame on badawi, shame on the government.

please do not ever make the mistake of addressing this Chegu whatever person as Che. There is only one Che (Guevera if you don't know) and no one looks promising to ever take over his role

It's time for us to learn from the Argentinean Marxists and adopt a proper way of life.

Look better than Khairy, less creepier and more halal than the World Halal Forum chief....vote for him based on looks alone. Heh

Obviously Badrul is an intelligent person, made himself somebody from nobody. He is a Macgyver.

KJ on the other hand, a typical "kalah judi" kid. That's the core reason police required to protect him in his demonstration. Expect nothing sensible from a Monkey. Period!!!

A true follower of Che would know the good doctor didn't mix religion and politics.

You have corrupted his ways. It is because of people like this Che wannabe's which make the majority condemn the way of Marxism and Communism.

It's just like Ahiruddin Atan trying to be Ramli Sarip. He may look like Ramli (Ramli on heels perhaps), or smell even smell like him (pakat beli perfume same)...but will never sound like Papa Rock.

anon(11:32A):
maybe true in some cases. but we can't tar chegubard with the same brush, can we?

now, Khairy on the other hand, is so clearly a product of someone with an unfair advantage over others.

sad sad. good luck chegubard.
no matter how hard you try.... you can't beat Khairy (Bapak Jibrail)...especially not in Rembau.
not because Khairy is popular. but it's the awesome Barisan machinery that will slaughter you.

the people will vote for Khairy.
and frankly, when that happens... they deserve the leader they choose.

Everytime I see police's indiscriminate use of force on the pretext of enforcing peace, I feel a great big sense of hopelessness for this nation.

Good luck to Chegu Bard cos Khairy would never agree to his maiden election in a constituency that's not 100% safe.

and if i may say so, it is a crappy blog.

All those folks, who only know how to complain about KJ but turn the other way when a young man rises to challenge KJ, should hang their head in shame.

CheguBard at least walks the talk. At the very least, contribute your time to help him out in his campaign or donate to his campaign fund. Don't be like Pak Lah - cakap tak serupa bikin!!!

one looks like a beruk actually but get special treatment...sigh wat to do FIL PM ma and SIL is real PM behind the scenes.

KJ is power crazy...but it is time he wins something challenged, not walk over...agree KJ.

BTW KJ you FIL should give you the talk about not being racist cos you need it. what kind FIL, lecture Msians but own family can't lecture.

Rockyfella, if the dirty cops can manhandle the Chegu Bard the way it is depicted in your photoshot, then let the people in the next GE simply throw the KJ Bum out of his cozyseat.

another Che wannabe? and a Cikgu leaving behind his small students stranded in class room with another unwilling replacement teacher, so that he himself can pursuit his political ambition?

no wonder our education system sucks...

cikgu bard looks like a decent feller. i would definitely vote for him if he stands in my constituency. i do not think we should hold his good looks against him. definitely better to have a look like that than the brutish look of khairy at the demo.

I have an aunt who is one of the VP Puteri Umno of a district and the whole bunch (the puteris) adores this son-of-a-gun.

He's like a prince in the Umno-utopia. The highlight of any puteri or putera meetings would be sharing a shot with the prince.

i think, its enough said about this two tough chaps.

correct me if i am wrong, a beruk is a beruk, no two way about that, and KJ is a beruk.

would you or your family member vote a beruk in your lifetime, and be proud of your vote???

if no, do the right thing by getting rid of menace beruk from the streets.

Well, sometimes those can teach can "do" better

Well, sometimes those who teach can "do" better..

...sometimes when we tell awfull things to people like beruk or monyet the thing really kena balik lah...

Da UMNO puteri are airheads...they juz walk round with htier made up faces & want their shots in the paper...how can they make intelligent decisions???hence they fawn over beruks!!

Hate to say this but he'll lose to KJ.

This famous (perhaps notorious is the more apt word) Son-in-Law reminds me of those fairy-tales about a frog which turned into a handsome Prince.

Except that in this case the frog turned into an ugly toad. And a downright nasty and venomous one at that! If it touches you, you will be poisoned.

Khairy Jamaluddin is, without a doubt, this country's certified biggest jerk. He should be awarded that title on FHM Malaysia.

Khairy is no different then all the previous sons of PM's. Steal/cheat/rape do whatever you can while you can.