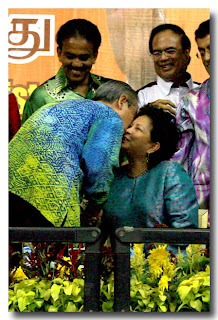 pic courtesy of Jinggo, who is still looking for pic of peck #1.

A day after Peck #1 .... the PM gives lensemen this rare display of affection for wife Jean (pronounced Jean) Danker.
A peck for political expediency? I don't know but some 6,000 people witnessed the romantic moment and there's a forum taking place at KMU debating this peck and the Datin's peck.

Poor PM. When you despise a person, nothing you did is right. Dont you get it? You are just not the right person!

Personally, nothing is wrong with you kissing jeanne. Afterll, its not like you were kissing sammy's cheek. His backside maybe. Its erection season, we understand. Nothing is taboo for a few extra votes.

May be he did the right thing at the wrong place. But again, what do we expect from the wrong person at the right place? Awkward gestures, stupid answers, meaningless statements, sloganeering... and oh my, he wants another 5 years!

Lotsa people hates you. Not the kiss.

Wooooh how come DBKL/Islamic dept staff not there to issue a summon for the action?

Actually the picture of Pak Lah planting the peck is fine with me , but Rock .... the Nauseating image of the Grinning Goons at the back just spoilt my lunch .thanks a lot !

nice. more people should kiss in public. and hold hands. and hug. good for pak lah.

public display of affection...haram or not haram? or maybe better worded .....hadhari or not hadhari.

Now THIS is inappropriate!

While he could not be held accountable for the silly exuberance of the Penang Datin, for him to initiate the same unconventional behaviour a day or so later, in public, is quite astounding.

Such a brazen disregard for the country's values and traditions is almost like spitting in the rakyat's faces.

Surely he knows how an Asian leader is expected to conduct himself in public. His political career, even if not scintillating, spans many years of holding top offices.

If it's not ignorance, then it must be arrogance. Either that or the man is so besotted with his second marriage and new wife that he has lost all self-discipline and self-respect. [Eeeeuuw! Gelilah!]

haha. i agree with jediraj.

yalah nothing wrong with a husband giving his wife a peck on the cheek in public.

no harm. of course not. it's his wife's cheek he's er, pecking... BUT since when, aah, political leaders peck their wives on the cheek? on stage. in public.

stop it. not whether it's ok or not.

try to remember...did he ever kissed his late wife, Kak Endon, on the cheek? yeah...ever?

now. the point is that he HAD to give her a peck on the cheek.

HAD to...some ladyplanted one on his cheekk the other day, so...this is DOMESTIC damage control.

Dia cium bini dia lah. Wot's wrong with that? It's the voyeurs at the back that screws the picture.

So, Pak Lah is a rather touchy feely man, we find. A far cry from the iron self possession of Dr M.

But Dr M gets to cry in public and Rafidah gets to lose her shoe running to wipe his tears.

I still think Pak Lah sucks at running the country. But he seems to be a nice family man.

This is no issue lah.How many of you men out there dare to show your affection towards your wife in public? Maybe you men don't even dare hold your wife's hand in public. So stop bitching all ye men and women.I can only say you people are jealous.

If you want to take a swipe at Badawi get him for his weak leadership.

certainly looks like damage control, but all the same, whats the big fuss!!

And for people to say it disregards our values and culture..for heavens sake, grow up! At least it was his wife and not some hooker!

And the idiots in KMU are just that - idiots!

only in malaysia ( and then some)

thats why most malaysians never can work

Erm, yeah, how come he is allowed to display public display of affection and other are not allowed to even hold hands?
It only goes to proof that there's nothing else on this useless fella's mind except sleep, eat and .........
And he is asking us to give him another term?!

this is called nothing out of nothing, what's big deal? there lot of unrelated people pecking/kissing the cheek when wishing each other in functions,clubs, party etc.. Arab men hug each other and kiss each other cheek..so!

Guys! Guys ! pull back your Blood hounds. Much ado about nothing here.I am not a BadawiAN but c'mon guys , charge him for all war crimes but judge the man not for showing his affection to his spouse in Public.Really ,C'mon ! Bigger Issues at Hand here . By the way , in the picture IT LOOKS LIKE HIM !Maybe even sounds like him ... Is it really him ?

The point here is, for those who cant even see a fly if it sits on their nose, is that many islam couples have been fined, jailed, shamed at syariah courts for holding hands, or just sitting in a park.
This Islam hadari bloke has set the precedent. I suggest all old files of those who have been fined for so-called indecent behaviour re-openend and the poor souls receive justice for injustice hammered on them by the guardians of Islam.
If not, PAS should drag PM to syariah court.

WoW! Pm is really furiously digging his political grave. Kiss 1, Kiss 2, AND THEN declare Thaipusam public holiday for Putrajaya.
Putrajaya 99.9% melayu population lah brother! Mana ada orang Hindu sana? Temple got ah in Putrajaya? Wah UMNO blokes in putrajaya will surely vote for you now.
Eh Rocky, plse do all a favour and blog percentage of race population in putrajaya, and also search if there got kuil, tokong, gurdwara, budhist prayer house etc.
I know there got veli big mosque.

Hah!
Malay men could learn a lesson from this.

And then ah rocky, when they were poor they ask their wives to stick with them, sell her jewelry and bla bla bla. Once they are succesful, sudah ada mercedes, sudah dapat Datuk terus mau kahwin lagi satu lah, merisik Artis laa...

Ah Rocky you Berani or not?

The Islamic officials should do something
This shouldn’t be happening in public
Even holding hands in public will be fined
So what about sleeping beauty did it in public?

Now what will the 4C say?
“We have lost the game
We will loose badly!”

Are we ready?
Are we still sleeping?
Like the sleeping beauty?

You still looking for that pic of the Penang Datin pecking Pak Lah?

Where's Tian Chua when you need him?

Did you see the pic of him, his daughter, sil and baby in the papers a short time back? Baby is cute and i wish him all the best but his mum's cleveage was for public display.btw it wasn't even a "nice" sight.So,nothing the horny but sleepy old fart does is surprising.All this is just represents the model islam hadhari family. new religion, new values ma.so, malaysians, just follow your role model and sue jais, jakim, rela,whatever else you call our oh so righteous moral police if they dare to stop others from following their leader and his family. If he can do it, so can everyone else!! so no more talk of kesopanan melayu pls.

It's nothing to many. By tradition, Malays or Asian do not show their spousal affection in public.

To show so, is not a sin. But we do not live by just hukum syarak, but also by hukum akal and hukum adat.

For a PM sloganeering Islam hadhari, more so, a pious-imaged politician, to do so in public and langgar hukum adat is not appropriate.

He is getting senile and stupid by the day.

P/S Did he express his expression to Hendon in this manner?

Don't forget they have been in Spain for AOC!
They are just giving demo of Western civilization for fellow Malaysian to learn.
If no objection, may be it will become law!
May be they will take God for Allah in due course!
Whether they have dropped some Malaysian civilization there, unknown!

May be he just wanted to whisper to her "I am awake, do not worry!"

Wah, it looks like I'm SO out of touch with Malaysian sensibilities lah! :D

From the many responses here, apparently public kisses as a show of affection and greeting between opposite sexes, à la Mat Salleh (Pak Arabs, I think, only buss members of same sex), is now quite acceptable back home.

In fact, if I were to go by the sycophantic grins on the faces of those looking approvingly at the PM bussing his Jean (pronounced zhahn?) plus a couple of the comments here, there are Malaysians who feel that it is not that bad a thing. Even when done by public figures of mature years in public settings, regardless that these are people who sort of dictate the norms.

Presumably this is okay as long as it is between spouses lah. Or better yet, between new spouses, right? With old partners, married to since yonks, better not chance it no matter how chic and au courant. The intro of this mat thang may be construed wrongly.

Good to know that show of public affection à la Mats is no longer a big deal in our country. Henceforth I consider myself updated since here I am still preaching professionally to foreigners on the "right" way to show affection in public in Malaysia in order to avoid potentially serious cultural faux pas (or worse, the reactions of the notorious Malaysian moral brigades) when they visit or when their companies expatriate them to our shores.

Thanks, guys! I learn something new (and valuable) reading the responses to this entry. I should incorporate this pix in my slides to support my new contention but still add a caveat, to cover my back in the eventuality this "new" convention is only for the likes of Pak Lah and the Malaysian westernized sets.

In any case way to go, Malaysians! Our attitude about basic human rights may suck generally, but we sure know when to appear progressive.

Spare the dozer imam for this one.. its just an affectionate gesture of him to his legal wife. That's probably the least good things about this old guy...we all know he is a true family man (probably coz energy constraint to spare any Mongolian beauty or personal friends..hahaha)

One thing spoil for such romantic scene pic is the panorama behind... :P

Dear people/& SOME imbeciles,
The PM and wife are the main guests at this MIC event.
Now the PM gives his wife a peck.
Just where do you all suggest the onlookers look?
Calling them goons and orang belakang just shows your brainlevel.
They were actually being POLITE and grinned and put whatever nice face to be politically right.That all!!
You guys are just also wasting precious time commenting on this anyway.
bOZOS.

maybe two rules, one for the elites, the other for the underlings. one, jakim out of bound,the other jump out of the bushes and scare you.