A boycott, the setting Sun, the rising Star 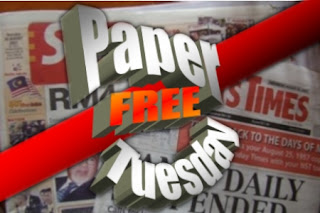 Paper-free Tuesday and how they plan to kill off the Sun
At the press conference yesterday, lawyer Haris Ibrahim spoke about how the purchase of the Nexnews group by tycoon Vincent Tan confirms the politics-media nexus responsible for the suppression of press freedom in Malaysia. Nexnews owns the Sun, whom many consider to be the "free-est" daily around.

There's actually more from where that comes from. The Star is expected to announce soon the purchase of 30 percent of Nexnews, for betweeen RM1.80 and RM2 per share. The plan is to place the Sun under the control of the Star. The Star's editorial bosses have been briefed.

Only the Edge will remain in Tong's hands.

View story, comments and pictures on the Boycott-the-Papers launch here.

Rocky, my goodfella, don't you read the writing on the wall? Now's the right time to position yourself to take over where those MSM goons left behind. Strategise and put on your entrepreneurial thinking-cap and come up with an online newspaper of the people, for the people and by the people! Citizen Nades and all his soon-to-be retrenched bozos at the setting Sun should be of great help to you, bro.

You are ONE of us and we are ONE with you, Rockyboy! THE SHINING MOON should be the name of your new e-paper in light of the gathering gloom and darkness looming at the horizons in Bolehland country.

Might as well organise a total boycott of all MSM papers. Why bother with only no-paper Tuesdays? If the Star team ends up running the Sun, we'll just have more of the same shit. It really is no big sacrifice shunning the newspapers... we can get the relevant news on the Web. Better still, hit them where it hurts. Stop all ads with them,whether classifieds or otherwise. It is so easy to make a difference if we stay united on this.

Live with integrity
Live with principles
In news coverage
The people pay
Don’t you ever forget!

It's all about the big fish eating up the small fish to monopolize the industry. Nothing really new here. The question is weather the underdog would want to sell themself out? Sorry, can't be in on this Tuesday's one. Like I say not Tuesday and Thursday for me ... :)

I have abstained from buying the mainstream printed media for some months, and have never watched or listened to RTM for aeons.
Lies, twisted facts, propaganda, misinterpretation and bullshit is news I do not want.
Paying to be lied to adds insult to the injury.
Good luck with the boycott.

do it rocky. rope in the responsible journalists and start an on-line paper to complement malaysiakini. the country deserves it. i am sure there wil be lots of supporters. just confirm you are starting one and i will chip in.

Journalism is a hazardous occupation. (NOTE: In Malaysia it is NOT a profession)
Anyone can be kicked off and his family left in a lurch as the man of the house is left jobless.
Ask Kadir Jasin, Dollah Kok Lanas, Rocky, Gobind Rudra, S.F Yong or H'ng Han Yong.
That is why I tell every young man and woman I meet to shun this profession if they plan to work in the country.
Why sell your soul for your monthly pay check?

rocky dude, if you want to boycott those papers, "the setting sun and the dying star" is better.. haahah...

The lobbyist's are saying that we must boycott MSM because they are not saying the whole truth, hide facts etcetc..

This call by the lobbyist sends a message that we the readers/rakyat are dumb and stupid and ignorant of what is the real situation/facts as though we based our mind solely on what we read in those MSMs. (the fact that you people refute many writings of the MSMs dont ring any bells at all that what the lobbyist are trying to do is actually dumb and stupid).

Opposition publications also dont say the whole truth, hide facts, do wild allegations without proofs etcetc.. (I read many but I dont boycott any). By the same logic of the lobbyist, we should also boycott these publications!

Some blogs do the same too. We should also boycott these blogs.

Problem is, I dont see any calls towards that end.

Oh I get it, everyone else is fine but not the Government!

Those leftover papers are good for nasi lemak wrappers perhaps..whatever value they still worth...

they've proven to be a good asshole wipers for the BN politicians..opposition papers also talk craps & don't make them a cent worth either..

VT never bet his own money.
So, who's paying for the takeover? Bru said The Star. Maybe.
But I say VT had extracted a handsome quid pro quo from the AAB Govt.
Another privatization project maybe -- like Sports Toto?
The Sun was getting too independent.
The Star is under threat. So kill off The Sun. Or make it as bland as The Star or as moribund as the NST.
So, there's greater freedom of the press under Dollah?
At least Mahathir did not talk about freedom.
You can already see the toning down of The Sun.
I have stopped reading it.
Maybe this is the blessing in disguise for bloggers.
Ex-Sun Reader
Kuala Lumpur.

I hope the government hasn't responded to this boycott with a boycott on wordpress blogs.

Is anyone else facing the same problem as me? I am in Penang, and can't load ANY wordpress blog since 4pm.

Its a clear effort of transparency where you just shut off the people are perceived anti establishment and against the Govt..hurray

Go a step further beyond boycotting the MSM papers. Organize bonfires of them in every town. That way the editors of MSM and their political masters will know the real extent of our disgust with the lying and spindoctoring of the mischievous MSM. Down with the MSM!!!

paid cybertrooper? just like the editors, sold your soul for a few quid. aint no surprise.
if you dont want to participate in the boycott, just go on and continue to support the MSM. Nobody is stopping you. stop trying to defend the indefensible and thereby expose yourself as a paid cybertrooper, which to me even rank many notches below a prostitute.

by the way, even Tun Mahatir is of the view that the press does nothing but spin these days. he just repeated this today to foriegn presses. rest my case.

Is boycotting the MSM means boycott of reading or buying ?

Can I still read or watch the MSM if it's free ?

I support you bro

Mahathir is nothing but a sour grape who has the chicanery of saying two extremely opposing views when it suits his convenience. What business has he to condemn spindoctoring and lying in the MSM when he himself supported this while he was PM? Look at Mahathir subscribing to notion that there are no permanent friends and enemies in politics - observe how he made complete u-turn when he sucked up to George Soros not too long ago after condemning for causing Malaysia's foreign exchange losses in Asian Financial crisis in 1997. Can you trust the word of someone like Mahathir who speaks with a forked tongue when it suits him and makes no bones about it?

the man behind the takeover is khir toyo.

Anonymous of 9.32 pm, I am surprised that you would think me as a paid cyber trooper JUST BECAUSE I question certain postings. I suppose whoever gave dissenting views is a PAID CYBER TROOPER to you and that dissenting views have no place in here.

I represent nobody and paid by nobody. More ofthen than not, I dont agree with what was written and I believe (I also hope you believe in my rights to have diiferences in opinions) it is my right to agree or not to agree. Nothing wrong with that.

After all, this is what most bloggers and commenters are doing eg rocky i.e. writings comments/views not consistent with supporting the government position or views. DONT YOU AGREE?

It looks as the writing is on the wall as far as The Sun is concerned.

Vincent Tan has said that he "would prefer to be friends with everyone" (Spore Straits Times report, Jan 30).

And citizen-nades (the bane of Khir Toyo and certain Majlis Bandarans in Selangor) is on leave till Feb 29.......

Read between the lines.

The Sun is due for a good "spring cleaning". In time for Chinese New Year too! ;-)