Crackdown on Bloggers begins?
Cucumatkilau, a PKR-proposed candidate during the last general election, has claimed that police broke down the door of his home in Kuantan yesterday morning before cuffing him and taking him to the police station . He claimed that the cops did not produce any warrant for his arrest and did not say why he was being arrested.

Blogger Datuk Ron alerted me of the incident some hours ago and has since done two postings (here and here) on the arrest.

Now, even before the arrest of the Hindraf 5 there had been talk that several bloggers would be arrested under the ISA. Obviously I didn't give such talk much credence. Let's just say I was more concerned about the "chilling effect" that it could have on the blogging community. I am still not ready yet to believe that the Government would actually be so naive as to target bloggers, but that's what people are going to talk about until/unless the cops issue an official statement and explain its action on Cucumatkilau and respond to his claims.

Back to Cucumatkilau. The 36-year old former Umno member said the cops came to his house at about 10 a.m. yesterday and released him about 10 hours later at 8pm. After his ordeal, he wrote in his blog cucumatkilau.blogdrive.com what looks like a Part One of his own account on what happened.

Was he arrested because of his blogging? Cucumatkilau hasn't said in his posting if the cops had told him so but they did confiscate three cellphones and a laptop belonging to him when they arrested him. We do not know if these items have been returned to him.

Looks like we'll have to wait for Part Two ... 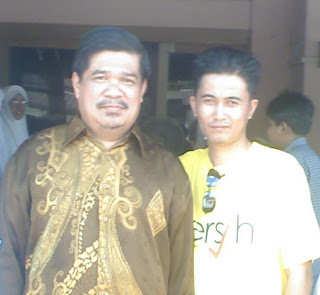 pic of Cucumatkilau with Pas' Mat Sabu, one of the politicians nabbed in a belated crackdown [here] by the cops on Dec 9 against the Yellow March organisers.

Well what can I say, we cannot have a peaceful (I repeat Peacefull gathering !!!) gathering to express our views. Need a police permit, which is virtually immposible to get, whilst the 20 Reps from the "so called Silent Majority of 395 NGOs'" can meet our PM in TUDM airbase and present their Memo together with a thick document. Now, blogers are targetted. Best wishes to the Multimedia Super Corridor (MSC) which guaranteed Intellectualtual Property rights, minimal restrictions on the Internet, flowing FDI's and creating so many jobs for our Bangsa Malaysia. Fellow Bloggers, do not be afraid !!!

Rocky,
Below is an interesting excerpt from the article in The Star. It can be interpreted as ALL our mainstream newspapers, ALL BN politicians and the IGP are guilty of this act as ALL these people have time and again warned the people of a possible repeat of May 13 riots if you vote for the opposition!!! Kelantan and Terengganu fell but there were no riots. All the editors too should be hauled up if they warn of racial riots again.

Another characteristic of our society is that whenever sensitive
issues are touched upon, rumours will circulate of possible racial
conflict.

Many do not realise that passing such messages can amount to an
offence. Section 28 of the Internal Security Act 1960 provides that
"any person who, by word of mouth or in writing or in any newspaper,
periodical, book, circular or other printed publication or by any
other means spreads false reports or makes false statements likely to
cause public alarm, shall be guilty of an offence".

If anyone thinks that he is immune when using e-mail or sms, it should
be noted that the Act is all encompassing and covers everyone. Even
more relevant is Section 211(1) of the Communications and Multimedia
Act 1998 which stipulates that it is an offence for a content
application service provider or other person using a content
application service to provide content that is false.

Section 8(1) of the Printing Presses and Publications Act 1984 states
that: "Where in any publication there is maliciously published any
false news, the printer, publisher, editor and the writer thereof
shall be guilty of an offence and shall, on conviction, be liable to
imprisonment for a term not exceeding three years or to a fine not
exceeding twenty thousand ringgit or both."

Although this provision is meant to be used against those involved in
the publishing business, it is a provision that needs to be kept in
mind. In view of this, it may be asked whether it is necessary to
exercise detention powers under the Internal Security Act 1960.

Unlike other laws where an offender is punished after committing the
offence, the Internal Security Act is pre-emptive in nature when
security is otherwise likely to be breached. However, because
preventive detention does not allow a person the same liberty and
privileges that are otherwise available, it is subject to criticism.

This is very serious stuff & we cannot let this continue.

Racial and Religious instability their fears?
Or Political merit, their real fear!
He was caught because of Blog?
Or because of potential to block
unfairness in the coming GE?

Well well, Christmas is not Merry after all for us bloggers.
I expected the crackdown against bloggers. But cucumatkilau's treatment at the hands of the police is something disgustingly heavy-handed.

I just hope the "powers" that be realises what kinda backlash they can expect.

Not that this will have a "chilling" effect on my blogging.

It's the sad truth that we speak of Malaysia as a democratic country embedded with an autocratic system. We don't have "a" dictator; we have a dictatorial system.

In Pakistan, the Justice System would dare to go against the dictator. In Thailand, the civil service and uniformed service would stand up to defend the peoples' rights against a corrupt govt.

In Malaysia, the 3-branches of the govt is integrated and comes under the Executives and the Prime Minister have no control over the Ministers and the Little Napoleans, oh lest I forget, even his family members can defy his values.

This is freedom under Badawi. So lets get our friends to all vote against BN to get rid of Badawi and his son-in-law.

So Wong Chun Wai, the budak upahan Khairy & Kali, please write in your next article that we have freedom under Badawi's administration.

I think that ACA should order all top editors in the country to declare their assets. This declaration is very necessary in the light of these top editors living a lavish life style.

now you know why the police will neevr want an IPCMC! no way they allow their wanton abuse of power to be curtailed.
Its a big joke with the SSC. The IGP sitting in the panel to look into complaints against his police force? by the way, whats left in the credibility of his office with his outright lies in the recent rallies. what more, he has not even uttered a word to dispel accusations by RPK against his link to the underworld kingpin by the name of Tengku Goh.

Where will we be then?
Even in blogs the police want a piece
On the people who blog

Are the leaders that afraid?
Of the internet community around the world
Telling what they think ills the nation
The sleeping beauty doesn’t seem to know
Saying one thing let others do the wrongs

Where will we be then?
Change them in the ballot boxes
The change will start from there

In exchange for economic propsperity and relative peace we have allowed the government's juggernaught to demolish all our fundamental rights.
Now we are helpless, really helpless.
Why?
The Executive, The Legislature, the Government, civil service, Police, Judiciary, the Election Commission and UMNO have been consolidated into ONE ENTITY!

No Independent Commission can help us. It's mati katak!

ROCKY, ALL BLOGS MUST MAKE A STAND HERE. LET'S TALK ABOUT THIS WED (TONITE).

The guy has that look capable of carrying a no war protest by himself at the front gate of pentagon.

I don't think it got anything to do with blogging. By the bersih posters, could he be the organiser for pahang?

Don't discount the possibility that it is beyond just blogging.

This is freedom to Bodowi. He talks in his sleep. This is his superb capability which no one on earth can emulate.

Enough is more than enough. We must all stand up against the enemy of progress. We are all enemy agasint nepotism except Lim Kit Siang and Karpal Singh, who are desperately trying to promote their sons.

I think cucumatkilau was 'over act' in his blog. Why police arrest him, not Bro. Rocky? Any blogger must responsible in their blog. Don't have to blame police always.

This is called "blogger cleansing".. pioneer style initiated by the current govt regime...

Choked the pipe line to control the flow... but these people forgot one thing..fluid mechanics..choking cause internal build up pressure that will sure leak or even worst if the pipe wall are not strong enough -> burst!

marginalized the minority blogger... not you Rock..
Rocky's Bru..you're a majority.. millionaire ..

All type of peoples are with you..

Keep up the good work, bro!

2008 CNY is a rat year!
Just came back from long year end holiday..lucky my kampung no banjir..