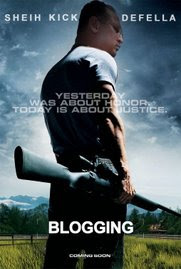 Sheih Kickdefella. While the BN-led government continues to rain blows on the blogging community in its attempt to cow the bloggers and force them on their knees, the PAS government in Kelantan has wooed Syed Azidi Syed Abdul Aziz, the owner of the politically-potent Kickdefella blog, to work for the state government as a Corp Comm Officer.
Sheih, who is a protem exco member of the newly-formed All-Blogs, is the latest blogger to be recruited by the Opposition parties. Tony Pua, an Oxford grad who was running a successful IT firm and two blogs, joined the DAP recently and is expected to run during the next general election, which may be called later this year. In Sheih's case, however, there are no plans to make him a candidate in the general election.
Two reasons why not:
1/ He is NOT a PAS member
2/ He is a card-carrying Umno member [he was a two-term Youth leader for Umno Sri Hartamas and now sits on its exco]

Any which way, someone is recognizing the potential of bloggers in Malaysia. I look forward to the election campaign posters that Pas will be churning out at the next GE. I also look forward to Umno's reaction to this news. I know of Umno bloggers who are bloggers but can't come out in the open and declare themselves as bloggers due to what the government think of blogs.

certainly a coup for Pas.

eh,
nobody wants to hire a Satirist like me, boohoo...

ZAM, c'monlah and hire me! I will help chu 'hentam' and demonise Bloggers! Diskaun available if ZAM sign me before the next G.E.

Congrats to Badak Shooter. Way to go. Now, to quote RPK, "We want to visit Kelantan, can u arrange Lojing for us?"

imagine when NAB become a huge movement with bloggers from different colors of life and hold a different positions in community. huh!

That is matured politic. Strange but true. Well, politic is the arts of the possible. Congratulation to Sheik.

Will UMNO now sack him?

anonymous,
Thats an interesting question. Maybe someone can conduct an oline poll on this. Sang Kelembai got the sack so would they do this to our Sheih? Would it be productive for them to sack him?

Sheih can only be a sniper, if he is unable to be detected. That's the advantage of a sniper. Quiet, waiting at an assuming location, ready to make that single shot.

Sheih is no where near that! Sheih is celebrity now. He advertises where he will work, who he works for and what he'll be doing. In short, Sheih is like "Truman", played by Jim Carey.

Maybe Sheih now is a target by another sniper. :)

Making a mountain out of a molehill. In the begining he was a good read, when his blog was very focus. Then when he got famous, he tried to hard to be creative and dramatic, just like the his movies. He lost me, since then.

When bloggers start selling themselves to be the mouthpieces of political parties when their initial standing was independent and free, it's a sure sign that moral decay has set in. To be at the behest of political masters/manipulators defeats the professed intention and purpose of this new media - which is the expression of private/personal viewpoints for which the individual takes responsibility. I will be completely disillusioned if bloggers like Nuraina, Marina and Rocky go this way. This is exactly what I mean by Power Game and the loss of integrity!

Rocky, I've just read Susan Loone's posting and failed in sending my comments to her so I hope you will allow me to say this here.

"Susan Loone - this is the kind of insidious comment and persuasion that people like you think is so hip and hot! This is the sort of warped logic that the young intelligentsia revel in to arouse negative sentiments in the name of love for the country! And from abroad too!

What kind of Malaysians are we breeding here who are professed members of one political party and become the mouthpiece of another?
What kind of allegiance/loyalty/honesty/purity/ moral virtue/principles/credibility/fairness/justice are we nurturing in our citizenry when we applaud them for oscillating like lalang at the behest of their political masters/manipulators?

Do we want Kickdefellas and Dorian Greys to permeate our nation - who are prepared to sell their souls to the Devil for a bit of temporary fame and glamour?

Susan Loone and Tuan Sheih - if you ask me, this is indeed a LOONY development!!!"

And for Jeff Ooi to liken Sheih Kickdefella to Imam Ghazali and mock Pak Lah's poem is the kind of smug comments that ill-informed bloggers like to make and encourage.

When people oscillate like lalang between two political camps it's time to take them to task about their real nawaitu. It's not enough to say you're doing it out of love for whatever. We want to know (and the children should be told)if Sheih thinks he is huge enough to bridge the gap between warring political factions and emerge as the next Tok Guru if not Imam Ghazali!

may Allah bless u
congrats.

Pity he will not be seen as an independent blogger anymore. He had sold his soul.

Maybe a new independent blogger will emerge who will kickthisfella.

How easily people fall into the generalization labelling trap. One of the true test of professionalism is what we are seeing happening to bro Sheih as well as other less 'high profile' personnel everywhere. Nawaitu, is between him and God. Actions and results are what we gonna see. Everyone deserves the benefit of doubt.

off - did you ever stop to think why sheih made this kind of decision? do you think it was a spur of the moment, knee-jerk reaction? he is fed-up with hypocrisy, with nepotism, with cakap tak serupa bikin - i.e he is trying to save his soul and not sell it. everybody is entitled to do and be what he/she likes without worrying what people think of it. important thing is it is good for the country and the people.

recently, the whole blogger community has a lot to say about what Rehman wrote. Isn't this Sheih doing just the same.. cari makan.

fuuny, when he is one of your own, you guys just can't seem to see the fault in this.

in 3/4 months Sheih will be forgoten.

sheih as an umno member has been critical of umno. how do you liken that with the rectumising by rehman, anon 10.20am?

Sheih just going off to work with the Menteri Besar Kelantan Inc aka an agency of the State Govt. He is not going to denounce his membership of UMNO and join PAS.

This is just a career move. That's all!

BigDogDotCom on behalf of all the doggies and bigdogs in the Blogosphere wishes Sheih a successful new career in Kota Bahru.