Government got money or not?

Ramadan 4, 1442: When the Prime Minister of a country says the Government does not have much money left, that's serious. Everyone should be panicky. It means the Government no longer has the funds to manage the country properly, let alone pay its debts. In other words, we're reaching rock bottom. Will there be enough money to pay civil servants' salaries?

Well, that was what PM Muhyiddin Yasin said yesterday, believe it or not.

“I went to school, but I am not good at calculation... how much it adds up... it's more than RM600 billion – that’s a big sum of money,” Muhyiddin said during a Vaisakhi celebration event with the Sikh community in Petaling Jaya.

“What I am trying to say here is that we don’t have much money left.”

Fortunately, there was no panic reaction to Muhyiddin's remarks. There was no bank run, no riot or looting, nobody died, the stock exchange was nonchalant. In short, nobody was panicky. But how come?

"Nobody believed him, probably," said one corporate leader friend.

Well, maybe. One think tank has come to argue that what Muhyiddin said was NOT TRUE.

PETALING JAYA: A public policy think tank has described as “unsubstantiated and misleading” the statement by Prime Minister Muhyiddin Yassin that the government is running out of money after spending RM340 billion on economic stimulus measures and RM322 billion on the 2021 budget.

Research for Social Advancement said the statement has misinterpreted the term “government spending” and overstated the fiscal burden on the state coffers.

Researcher Jaideep Singh said the RM40 billion in withdrawals from the Employees Provident Fund was not a fiscal stimulus as it had come from the contributors’ own savings.

“For other macro-financial measures, support typically comes from Bank Negara, which does not rely on government money and therefore does not directly affect the country’s fiscal deficit,” he said in a statement.

Jaideep said the finance ministry itself had admitted that only about RM72.6 billion, or 21.4%, of the total RM340 billion figure took the form of direct government expenditure through fiscal injections.

“This figure covers health spending, cash transfers, the Wage Subsidy Programme and infrastructure spending, which are all borne out of the government’s budget,” he said.

He said the actual amount of government spending to date was likely to be even lower than the RM72.6 billion previously announced by the finance ministry, since not all fiscal injections were immediate.

“There is a time lag between the announcement of fiscal policy measures and the eventual disbursement of funds,” he said.

“Some of these, such as tax relief, do not have a direct accounting value apart from the opportunity cost of tax money foregone, which is likely to be negligible for affected sectors anyway.”

He also argued that higher spending due to the stimulus measures was not unprecedented, citing the 2009 budget, which had a fiscal deficit of 6.7% amid the financial crisis.

Jaideep said now was not the time for alarmist claims, adding that the country can already expect an increase in government revenue beyond the 2021 budget’s forecast, with recent hikes in oil prices.

He said the most recent Pemerkasa package had also suggested that the government still had fiscal space to introduce substantial new injections.

“Ultimately, the way out of the pandemic-induced contraction is to implement more directed, strategic expansionary fiscal policy measures to promote consumption and crowd-in private sector investment, not to make unsubstantiated claims about the government’s fiscal situation,” he said.

The Malay Male finds his calling at a halal pub

Amir's Half-Easy
Followers of local blogs earlier this century may remember The Malay Male (not to be confused with The Malay Mail), a blog about the dark side of a young journalist from Pahang blinded by the city lights. Well, the journalist and author of that blog, Amir Hafizi, is now 41 and has just joined us at Bru Publication, the publisher of mole.my, as head of its newest division - BOOKS! There's only one reason why Amir is there: to help fellow journalists get published. Yes, believe it or not, very few of us journos can claim to be authors of books even though we may have written thousands of articles in newspapers and magazines. The late Ahmad A. Talib, for example, had written columns for the New Straits Times for decades before he passed last year. But not a hard cover or a paperback in his name and that's our loss.
Amir has lined up at least three big titles for 2021 and while Malaysia waits he has decided to start a column in The Mole called Amir's Half-Easy. Missing is the trademark colorful language of The Malay Male but nearly two decades on, it's still the same, old Amir.
Excerpts from Amir's Half-Easy - What's in a name

Half-Easy is a play on how my name – Hafizi – is pronounced. That fulfils the ‘writer obsessed with himself’ trope. It also sounds like how one wants his or her eggs, but that would be half-boiled or overeasy.

Talking about eggs, I like the fact that it sounds like the opposite to ‘hardboiled’ as in ‘hardboiled crime thriller’ because I discovered that I’m not noir and more grey or beige in my views of the world.

Also, it is quite sexy, suggesting that I’m only half-easy. A fully easy person is of course a slut and I am no slut, not for a lack of trying. The long list of women I was interested in but who later married better men is a testament to my failures as a slut.

Half-easy also means that some parts of me are hard – which is what is required for certain… tasks.

Want to read stuff from The Malay Male? 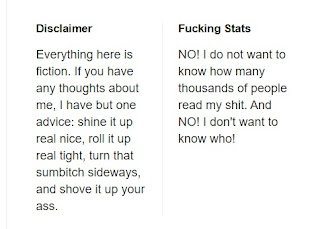 Annuar, KJ, Reezal: Traitors or rebels? (The ones likely to challenge Ahmad Zahid Hamidi, with a vengeance, at the next Umno elections)

"I will continue to serve the people, especially in Wilayah Persekutuan. And discharge my duties as Minister of FT to the best of my ability," he told friends after leaving the PWTC, the Umno headquarters where he and several other Umno leaders labelled as Bersatu-lickers had been given hell by delegates to the party's general assembly last weekend.

The last line, no doubt, is meant as an indirect swipe at  those in Umno, not least the party's president (criticizing the party president directly/openly can be costly, as Annuar's own press officer Tun Faisal Ismail Aziz found out last week), who have put the party on a warpath with its two Malay partners in the ruling Perikatan Nasional coalition - PAS and the hated Bersatu led by PM Muhyiddin Yasin.

At the assembly, Umno announced it was going to severe ties with Bersatu come the next general election, whenever that is (GE15 must be held by 2023). It was also decided that Umno leaders who hold Cabinet positions in the current government will eventually resign from their posts and leave the Government. Umno president Ahmad Zahid Hamidi, who's facing multiple corruption charges in court, said the party would also go after "traitors" within the party. A clear warning to those who'd rather serve Bersatu or the government than the party.

Annuar, 65 next month, is one of nine Umno leaders who serve as Cabinet Minister in the PN government. He is also the most senior and in recent months has become probably the biggest critic of Zahid.

The other thorn on Zahid's bud is Khairy Jamaluddin, 45, the Science, Technology and Innovation Minister and MP for Rembau. Observers are expecting more fireworks on the way after his post-assembly call to the Umno Supreme Council to "do the right thing" and ensure that party elections, due later this year, are not delayed. 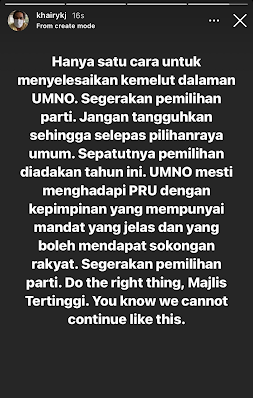 KJ had given Zahid a run for his money at the last Umno elections in 2018. At the same elections, Annuar Musa, ironically, contested as Zahid's running mate but lost to former Negri Sembilan Menteri Besar Mohamad Hasan for the deputy presidency. At last weekend's general assembly, Zahid and Tok Mat, normally not chummy with each other,  were seen as a cohesive pact together with Umno's former president Najib Razak. Party insiders said that was the plan. They took pains to make sure the trio were seen to be on the same side in the face of the so-called parasites and traitors.

Another Umno minister in Bersatu's Cabinet, Reezal Merican Naina Merican, has also spoken up. In If we quit, Umno's image will be tarnished, the 48-year old Youth and Sports Minister said Umno ministers in the PN government are doing their best to help the people and country. "There's no end to our duties and responsibilities. If we desert our responsibilities now, it will tarnish Umno's name," he said.

The Umno general assembly did not require Annuar, KJ, Reezal or any of the other Umno ministers in Muhyiddin's Cabinet to resign as Ministers immediately. But all know they are hanging by a thread which is held by Ahmad Zahid. The party president also decides where they contest in GE15, if they get to contest at all.

The only way to change that is to dislodge the president in the next party elections. As I see it, there will not be a shortage of willing candidates. But most probably, it will be either KJ again or Zahid's ex running mate Annuar Musa.